After almost one year ECHO Pro Wrestling held it's 4th event this past Friday night. This one was at the St. Cloud National Guard Armory, the same location as the first ECHO Pro event. The big names advertised for the card were The Honky Tonk Man and Road Dogg. 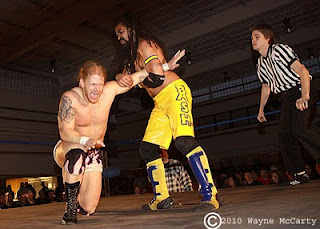 In the opening contest "Every one's Favorite" Nate Bash defeated Lenny Lane by pin fall. Lane had two of his trainees with him at ring side. The two trainees fought over who got to hand Lane the brass knuckles. That gave Bash time to recover and get the 3 count on Lane. After the match Lane had his two trainees kiss his boots. 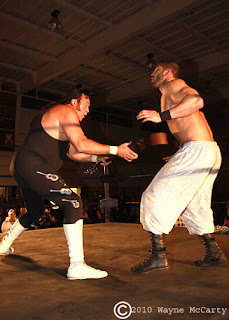 The Honky Tonk Man defeated Arya Daivari after the old 'shake rattle n roll'. HTM used the guitar after the match but he did not smash it over Daivari's head. 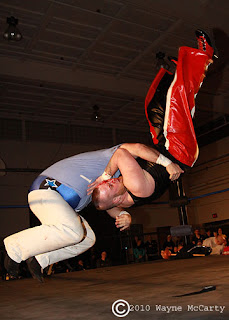 Horace the Psychopath pinned Arik Cannon in the third match of the night. This match was a hard core match as there were garbage cans and plungers used. Cannon's face was a bloody mess. 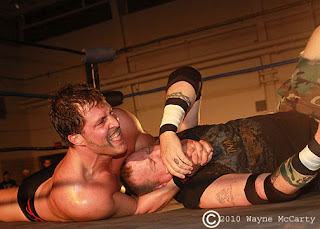 Brody Hoofer got the win over "Road Dogg" Jesse James. I think Hoofer may have used a foreign object but I didn't see it so I can't say for sure. At the last ECHO Pro event Hoofer lost to Jame's former partner Kip James. 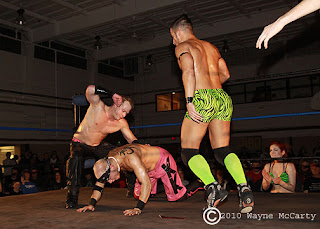 "Playboy" Pete Huge beat Kamikaze Klecker and Rob James w/Scarlett Bordeaux in a #1 contender hard core triple threat match. The end came when James was pushed from the ring onto a table and Klecker was suplexed from the top rope on to a bunch of thumb tacks by Huge. Both James and Klecker were bloody, mostly from a cheese grater. 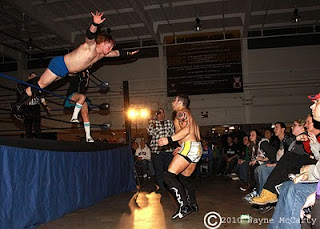 In his first defense as ECHO Pro champion Darin Corbin w/ Nikki Mayday was able to pick his opponent. His choice was his Northstar Express tag team partner Ryan Cruz. After a fast paced start to the match Corbin asked Cruz to slow it down. So they wrestled in slow motion for about a minute. Corbin got the win to retain the belt but the partners were attacked after the match buy Pete Huge, Rob James and Arya Daivari.
Posted by pro wrestling photog at 8:13 PM