I was interviewed for a pro wrestling fanzine called The Atomic Elbow. What's a fanzine you ask? Basically, it's a diy fan made magazine. Most fanzines are 8-13 pieces of paper half-folded in booklet form. I found out about TAE about a year ago when Nathan O'Brien reached out to me to do an interview for TAE. I met O'Brien seven or so years ago at a pro wrestling art show. So O'Brien  inteviewed me and I sent him some photos to use in the zine. 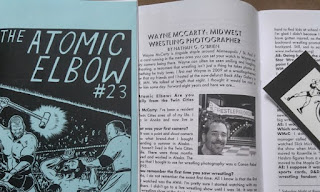 If you like pro wrestling, which I'm pretty sure you do, and you know how to read English then I really encourage you to to go to this web site and order The Atomic Elbow #23. If you like what you read then go back to that web site and buy some back issues. That's what I did. I bought the first 4 issues which were reprinted recently. I really enjoy reading them.
Nathan has his own zine that he produces. It's called Soda Killers. If you like puck rock, graffiti and mix tapes then you should check out Nathan's zine. Click here for the web site that you can order it from. Nathan also makes some really cool mini-zines.
Click here to listen to a conversation between Nathan and Robert Newsome, the guy responsible for TAE.
After you listen to that conversation you can listen to my conversation with Kyle and Dustin at the "Are We Rolling" podcast.
Posted by pro wrestling photog at 12:06 PM