I'm starting a new feature here on Midwest Indy Wrestling Photos by Wayne McCarty called '8 stupid questions with...'. Every so often I will try to get a wrestler to answer 8 questions and post them with some of my photos. Most of the photos that will be posted will be seen for the first time on the net. The first Wrestler I picked to answer 8 stupid questions is Rob James. 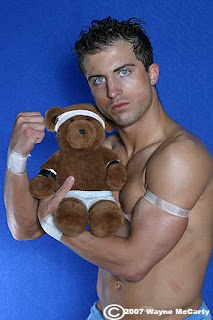 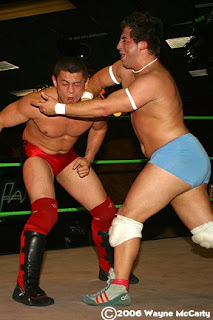 1) Were you a hulkamaniac? If yes then are you still a hulkamania? To tell you the truth with the new American Gladiator and his daughter growing up to be a hot POA, I am more of a hulkamaniac now! ( Rob James Vs Benjamin Sailer NIW 4/23/2006) 2)You used to go by the name “the Punisher”, was that because you were a big fan of the movie by the same name that stared Dolph Lundgren? I came up with that name was I was young, I used to make pro wrestling comic books in middle school, I would include my favorite WWF (at the time) stars with me and some friends of mine, I was The Punisher. Then I did back yard wrestling, and was The Punisher. A former Yarder trained with MPW, and got me into training and He always would call me Punisher, it caught on with the boys and thats how I started my wrestling career, with that name. (The Punisher Vs Renny D MIW 5/15/2004) 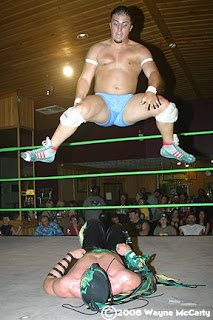 3)who do you think would win in a fight between Superman and Mighty Mouse? Superman no questions asked! (Rob James Vs Delerious NIW 7/01/2006) 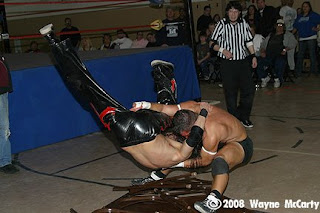 4)Do you have a favorite opponent and if so can you name your favorite match with that wrestler? Prophet, Last MPW Arena show in a three way with Prophet and Kamikaze Klecker was fun, but even better that that was in NIW when I took the Impact Title from him in a Ladder Match.. Used to Enjoy beating up Joey Envy, but I think he is too affraid to face me anymore. (Rob James Vs The Prophet MCW BG 1/26/2008) 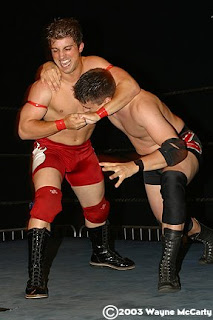 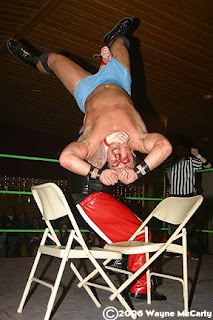 6)Don’t you hate it when you set your DVR/Tivo/VCR to record a show and it misses the end of the show because some stupid football game went into over time and all the other shows after it are shown later? Hell yes, and what I hate even more is that my new place has no cable connection for my tivo and I am paying for a box that records a black screen. (Rob James Vs Arik Cannon NIW 4/08/2006) 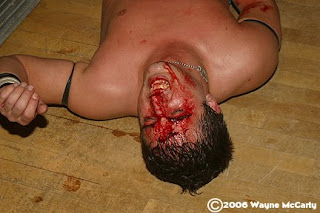 7)Do you like the sight of your own blood? Yes, when I bleed in a match in brings out a whole new Rob James, more intense! I lke seeing my oppenent bleed even more! (Rob James Vs Arik Cannon NIW 4/08/2006) 8)What three Rob James matches would go on a best of DVD?
Rob James Vs. Prophet (ladder match)
Rob James Vs. Ben Sailer (One of the Many great matches we had at Pro Wrestling Battle Ground)
Rob James Vs. Cody (Anarchy Rules)(Rob James Vs Cody O'Neill F1rst Wrestling 1/25/2008)
Posted by pro wrestling photog at 7:43 PM

Hey man, I haven't forgot about you! Great post!

I look forward to reading more of these. I posted a link to this at www.missouriwrestlingrevival.com under the "MWR Wrestling Buzz" tab.

right on Wayne. great new addition to the site.