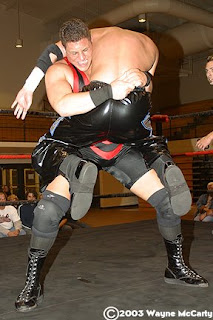 Recently another native Midwesterner made it to the big leagues. Colt Cabana debuted on WWE's ECW using the name Scotty Goldman. He seems to have kept the same goofball gimmick that he was known for on the indy level. Back in November of 2003 I had my first chance to photograph Colt at the IWA-MidSouth Ted Petty Invitational. In his first round match Cabana lost to future TNA star Jimmy Rave. 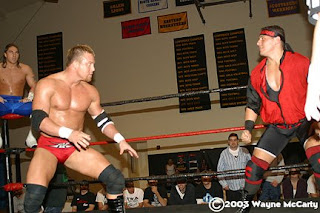 On the second night of the TPI Cabana was in a six man elimination match that also featured future WWE star Ken Anderson/Kennedy. Cabana won this match by pinning Michael Shane. Head on over to Dr Darin Davis's blog to read an old interview with Cabana. The interview was part of the Upper Midwest Wrestling Newsletter done by Tim Larson. Davis also has the whole UMWN archived linked on his blog. You can read interviews from 1999 to 2002 by the likes of Ed Sharkey, Dave Prazak, Lenny Lane, CM Punk, Adrian Lynch, Hellraiser Gutt(aka Bam Neely) and Shawn Daivari. 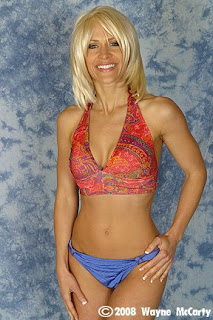 If you like previously owned clothing and Molly Holly then here is your chance to own some of Molly Holly's swim suits and other clothing she wore for WWE photo shoots. Head on over to Nora Greenwalds Ebay store to purchase this bikini or other autographed items. I've added some links to the right side of this blog to some online albums of my photo work. Right now there are three different albums: action, posed/8x10's and printed work. I'll be adding to those albums as time permits.
Posted by pro wrestling photog at 8:35 AM