There is a new promotion in town and it's called Intercontinental Wrestling Association and they had their first card this past Saturday night at Niesons bar in Savage, MN. This promotion is kind of an off shoot of the RWF that started up a few months ago. Snow was falling on this night but there was still a big crowd for this night of wrestling. 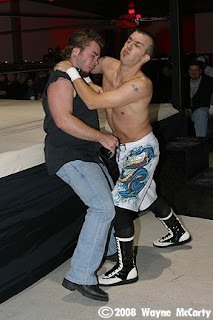 In the opening contest Mikey Stanley pinned 'The real deal' Sky Steel. I'm not a big fan of wrestlers that wear jeans as part of their gear. 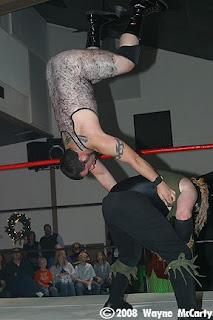 Corp. Julio Julio won by DQ over Udo when Udo hit ref Jay Soltice. Udo continued to choke Julio after the bell and new comer Corp. Ryan Cage came to the ring to chase Udo away. Cage is in the process of getting trained for the ring. 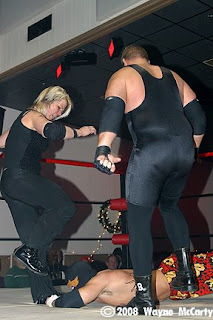 In an intergender tag match Ann Brookstone & The Brauler defeated Allison Wonderland & Jesse Chan. Brookstone bit both of her opponents in the crotch during this match. 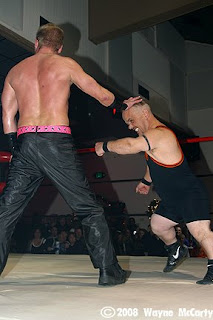 The IWA picked long time fan Razzlin Rick to choose an opponent for 'Playboy' Pete Huge. Rick thought that Bad Boy Brain would really test Huge but Huge was able to get a 3 count on BBB. 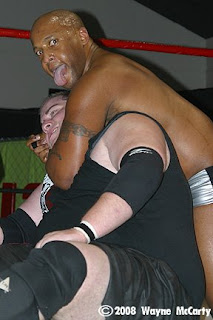 The Black Stallion defeated Venom. After his loose Venom challenged Stallion to a rematch. 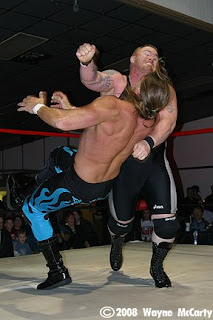 In the main event The Asylum defeated Mitch Paradise. The Asylum had a little help from a steel chair so Paradise asked IWA MN owner Dan Souprano for a no DQ match against The Asylum.
Posted by pro wrestling photog at 4:05 PM