There is a new promotion in Minnesota called ECHO Pro and they held their first event this past Friday night at the St. Cloud National Guard Armory. Former WCW/WWE wrestler Shannon Moore was the advertised headline but he was mixed up on which night his match with Pete Huge was so he did not make it for the premier of ECHO Pro. Near the wrestlers entrance there was a large screen set up with a projector. The projector was hooked up to the ring side camera. I think the screen and projector would have been better used if they had some pre recorded promos/interviews to play on the screen so the fans could get to know the wrestlers. 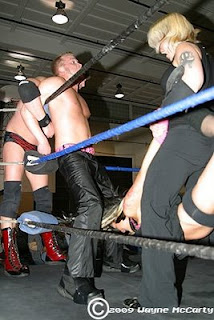 Ann Brookstone & Brody Hoofer defeated Allison Wonderland & Pete Huge in the opening contest. As mentioned above Huge was scheduled to face Shannon Moore in the main event for the ECHO Pro championship. With Moore not there ECHO Pro owner John Black put Huge in a mixed tag match with his valet Wonderland. 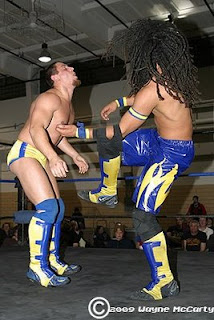 Tag team partners wrestled against each other on this card as Nate Bash defeated Benjamin Sailer in this exhibition match. The match went to a 10 minute time limit draw but the fans demanded 5 more minutes. Bash got the win with a roll up. 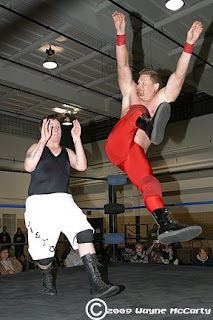 "Lightning" Toryn Cross and Josh Calisto ended their match with a double count out. Cross used to wrestle under the name Red Lightning. 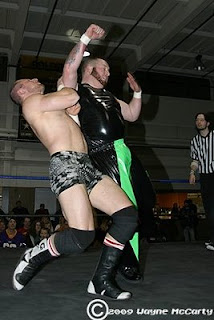 "The Anarchist" Arik Cannon defeated "Genuine Article" Chris Jordan. Connon got the pin after an exploder suplex and then a glimmering warlock. 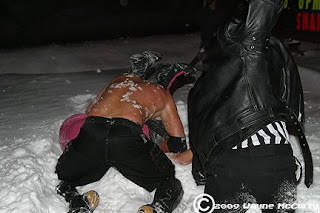 Joey Envy defeated Kamikaze Klecker, "6% Body Fat" Rob James and Ryan Cruz in a 4 way falls count anywhere elemination match. Cruz was eliminated first by James. Then Envy eliminated James with a super kick. Being that it was a falls count anywhere in the city of St. Cloud the final two wresters decided to take the match out side. The tempeture on this night was 4 above 0 and there was snow on the ground. After another super kick Envy got the 3 count on Klecker in the snow. Ref Rob Page borrowed a jacket when he went outside. The wrestler should have done the same. 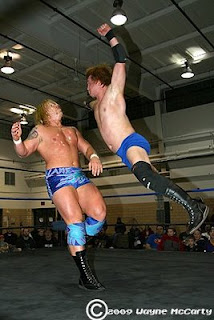 In the main event Darin Corbin defeated Lenny Lane. Ref Rob Page was knocked down when Lane brougth a chair in to the ring.When Page got up Lane was on the mat and Corbin was holding the chair so Page disqualified Corbin. Black came out and informed let Page know that Corbin did not use the chair so Page restarted the match. Corbin then got the pin after a lungblower.
Posted by pro wrestling photog at 8:39 AM