After a four months F1rst Wrestling returned to First Ave in downtown Minneapolis this past Friday night with a card titled 'Enter Sandman'. With a name like that it can mean only one thing, an appearance by former ECW champion Sandman. 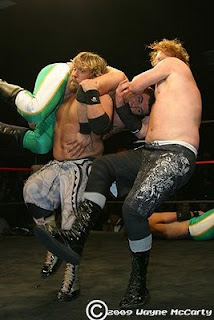 In the first match of the card the New Generation defeated the Northstar Express. These two teams have had many matches in the past as they have fueded since 2004. After Aaron Corbin and Cody O'Neill hit the move in this photo O'Neill pinned Ryan Cruz. 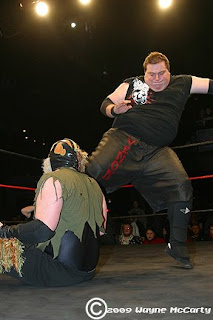 Venom pinned Udo after a muscle buster like move. 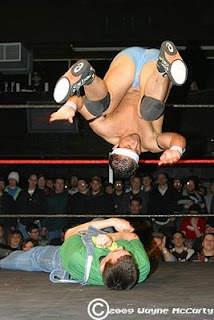 Rob James challeneged 'any fat slob in the building'. Instead of some fat slob some skinny farmer guy answered James' challenge. SFG didn't stand much of a chance against James as James got the 3 count on him in just a few minutes. 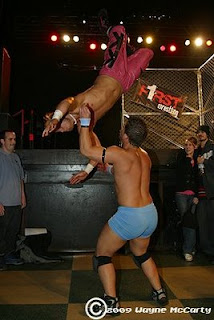 After beating SFG Rob James called for another challenger. Kamikaze Klecker came out to accept that challenge. Klecker got the win over James after a moonsault. 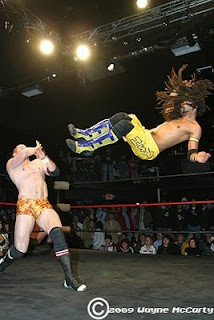 Midwest Ground & Air defeated The Junk Squad. Right before this match Jaw Braker and Tiki Torture, two members of the Minnesota Roller Girls, came to the ring to promote there up coming event. The Junk Squad came to the ring and Pete Huge got on the mic and told the Roller Girls to get out of the ring. Nate Bash & Benjamin Sailer then came out to start the match. As Sailer and Chris Jordan fought out side the ring Huge hit Bash with a low blow. It looked like the Midwest Ground & Air MN undefeated streak would end on this night. Rollergirl Jaw Breaker got in the ring and gave Huge a low blow. Bash rolled Huge up and got the 3 count. 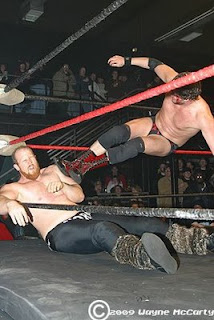 Brody Hoofer defeated Thoruf Marius in another battle of the big men. Hoofer got a cut near his eye when the two butted heads early in the match. 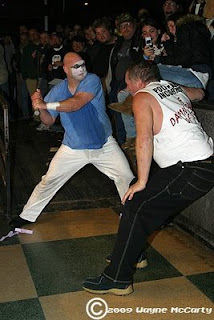 In the main event Horace the Psycopath defeated Sandman. The match before this one had more blood.
F1rst Wrestling returns to the West St. Paul Armory on January 30th.
Posted by pro wrestling photog at 11:36 AM