I don't usually use this blog to promote up coming cards but I decided to with this F1rst Wrestling show because promoter Arik Cannon made 3 different posters where all but 2 (The Iron Sheik and Arik Cannon) of the photos were taken by me. Also, I had nothing else to post this week. Seeing as how Cannon took the time to make 3 posters maybe you could leave a comment letting him know which one you like the best. 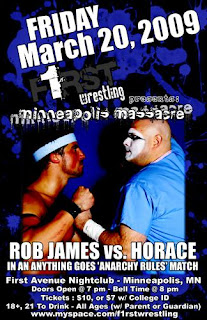 The main event for this card is an 'Anarchy Rules' match between Mr. 6% Body fat Rob James and Horace the Psychopath. These two have been tag team partners but recently split up. Horace started his split from James when he teamed up with fan favorite O.D.B. on the 08/08/08 card. Then on last months card James tried to get Horace to not wrestle Sandman. 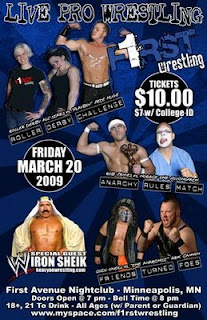 In a special challenge match "Playboy" Pete Huge will take on two roller derby all stars. At the last F1rst Wrestling show at First Ave Tiki Torture & Jaw Breaker got into the ring to promote an upcoming roller derby match. Huge came out and told the roller girls to leave his ring. Jaw Breaker had a hand in Huge & Chris Jordan loosing their match to Midwest Ground & Air so Huge challenged both girls to a match. 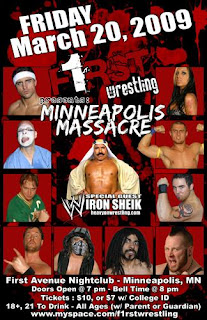 Before the first bell there will be an autograph/photo session with WWE Hall of Famer Iron Sheik. If you've seen any of this guys shoot interviews then you will not want to miss this chance to meet him in person. This special attraction is being presented by Heavy On Wrestling.
Posted by pro wrestling photog at 7:10 PM

Hey Wayne, I've been browsing through your photos. Great work.

I'm not sure how long you've been taking photos in the area, but I was wondering if you had any older pics of MIW? I lived up there for a while and wen to several shows. I remember Robbie Thunder, Drej, Red LIghtning, McCoy Counterfeit (he was great!, don't know whatever happened to him).

Anyway, if you have any pics from these shows around 2002, can you upload them or send them to me?

Leave a comment, if you can, and I'll check it.

It's been super awesome getting back in touch with you. As for the posters, I think I enjoy number two the best.

Anonymous,
The first MIW card I photographed at wasn't untill 2003 so I don't have anything from 2002. As for the guys you mentitioned that you remember You can find photos of some on my blog here. The only one you will not find photos of here is McCoy Counterfeit but I have seen him in the crowds at NLW shows.