F1rst Wrestling and Heavy On Wrestling presented a mostly women's card called "Friday Night Fantasy" this past Friday night at First Ave night club in downtown Minneapolis, MN. There were a few changes from the advertised line up. As reported on PROWRESTLING.NET, Johnny Fairplay (Survivor) and his wife Michelle (America's Next Top Model) were unable to make it to Minneapolis for this event. Most of the ladies sold 8x10's, and possed for photos with fans before the show, at intermisson and after the show. 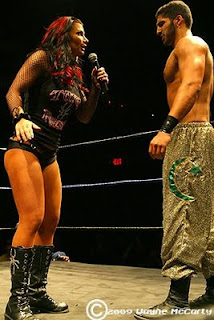 The card started with a men's match as Arya Daivari came out and claimed that the fans there didn't want to see women's wrestling. Cpl. Julio Julio came out to wrestle Daivari but all he go for his trouble was a big cut on his head as he was thrown from the ring by TNA's Tara. Terra then brought out Stacy Carter, aka Ms Kitty, and they both slapped Daivari silly. 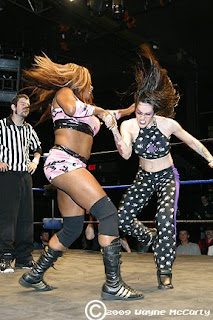 Sojo Bolt defeated Daffney in her return to First Ave. When Bolt was know as just Josie she had her second ever match in this same building. 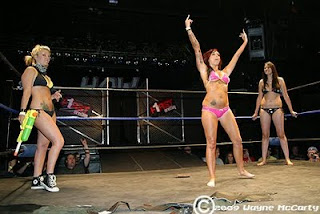 Allison Wonderland won a bikini contest. Also featured in this contest was Nikki Mayday who has done some back stage interviews on the F1rst Wrestling DVD's. Lacey Von Erich was scheduled for this event but she did not make it for some reason. 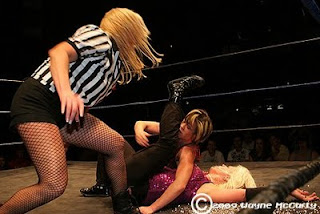 Nikki Roxx defeated Ann Brookstone in a falls count anywhere hard core match. Roxx pushed Brookstone face first into a pile of thumb tacks then rolled her up for the three count. The original WWE diva Sunny was the special guest referee for this match. 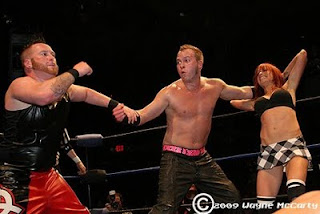 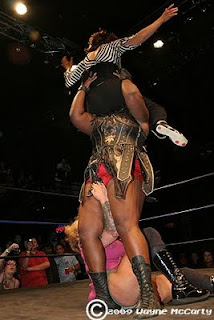 In the main event O.D.B. defeated Awesome Kong with a roll up/Molly Go Round. Nora "Molly Holly" Greenwald was the special guest referee for this match.
Posted by pro wrestling photog at 10:53 AM