This past Saturday night I got to go back to my old junior high school as the American Wrestling Federation held a fund raiser for the Anoka athletic department. This event was held at the Fred Moore middle school center for the arts. Back in my day it was just Fred Moore junior high. 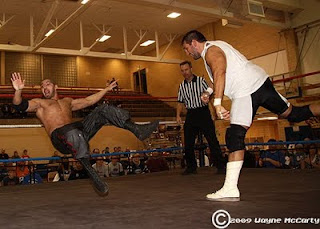 In the first match of the night K-Train defeated Arya Daivari. During intermission kids came up to Daivari wanting him to autograph their programe. Most of the kids held out the progame turned to the page with Daivari's brother Shawn "Abdul Bashir" Daivari. 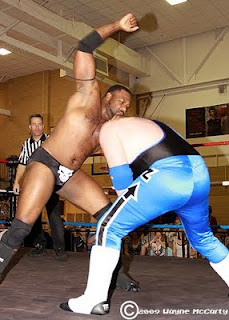 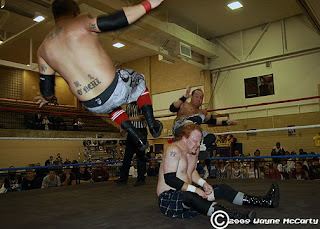 The AWF tag team titles were on the line as champions The O'Neill Twins battled The Misfits. In the match Aaron Corbin was joined by John Johnson who has been out of action for about one year. Cody & Cory O'Neill got the win and retained the belts. 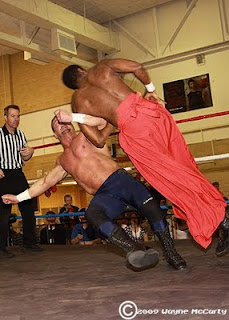 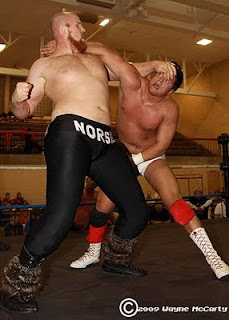 Thoruf Marius defeated Juice Robinson. I think it was during this match that the fire alarm went off in the building but no one moved an inch except to plug their ears. I remember doing many fire drills in that building and just like all those this one was a false alarm. 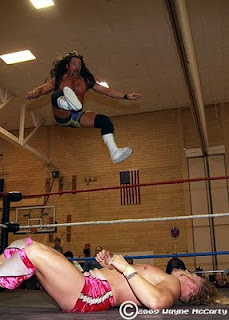 "Livewire" Johnny Parks defeated Lenny Lane in the main event. There was some outside interfance in this match as Lane had attacked the O'Neill Twins after their match because he is jelous of all the attention they get. The O'Neill's came out and attacked Lane when ref Jay Soltis was knocked down and the Misfits came out the even the sides. The tag teams left the ring area and Parks won the match after this leg drop shown here.
Posted by pro wrestling photog at 12:33 PM