The American Wrestling Federation held "February Free for All V" at the Elk River High School this past Saturday night. This was a fund raiser show for the high schools football team. This event was taped for the AWF's TV show Saturday Night Slam. SNS can be seen on channel 45 at 11pm in the Minneapolis/St. Paul area. You can also watch all the AWF SNS episodes on YouTube. 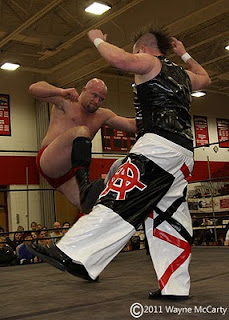 In the opening match "The Bulldog" Sammy Savard defeated "The Anarchist" Arik Cannon. Savard finished off Cannon with a stunner. Cannon's mohawk is getting pretty tall. 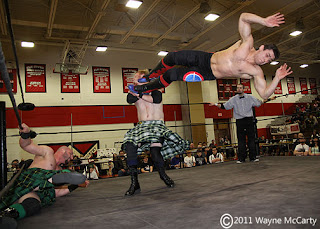 Benjamin Sailer & Ryan Cruz defeated John Johnson & Aaron Corbin to become the new AWF tag team champions. Sailer & Cruz are calling their tag team "Martial Law". If you think that's a good name for a good guy tag team leave a comment below. Just click on the word "comment". You don't even have to log in or anything. 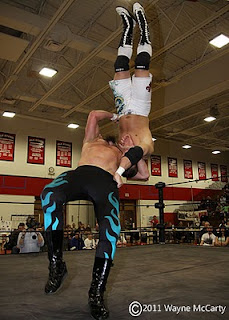 Mitch Paradise pinned Mikey Wipeout after a choke power bomb. Wipeout used to go by the name Stanley but now he is doing a 'surfer dude' gimmick. Wipeout even rode the wave on Paradises back. 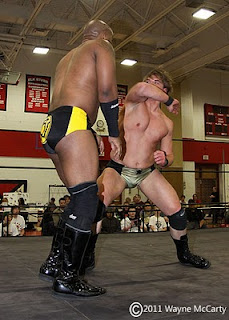 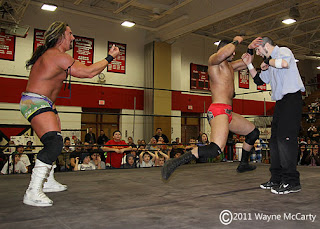 "live Wire" Johnny Parks defeated AWF heavy weight champion Arya Daivari. Unfortunately Parks won the match by DQ as Daivari hit referee Rob Page. After Page was knocked out another ref ran into the ring when Parks had Daivari pinned. The ref made the 3 count and gave the belt to Parks. Page finally woke up and DQed Daivari and gave him back the title belt. 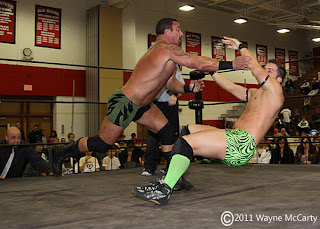 In the main event for the night Tony DeNucci defeated "6% Body Fat" Rob James in a no DQ match.
Posted by pro wrestling photog at 7:43 PM