Prime Time Wrestling was back at the Bloomington Knights of Columbus for their monthly show this past Friday night. 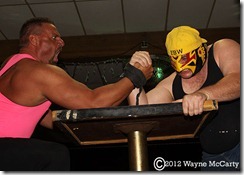 The first contest of the night was an arm wrestling match between The Brauler and El Bano. The contest ended when The Brauler poked El Bano in the eye. I think The Brauler was really intimidated by El Bano’s Over the Top hat. Some guy from the I.N.S. came in to the ring to announce that El Bano did not have a green card so he was taking El Bano back to Mexico. The PTW commissioner got in the ring and asked the I.N.S. guy if he could pay El Bano’s bond to keep him in the country until next months card when they will have a looser get deported match. 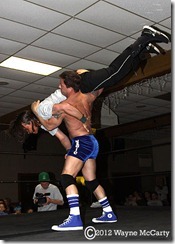 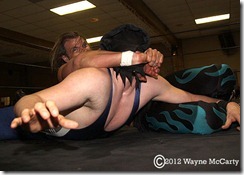 Magic Man thought that his match with Dorrian was so easy he challenged the next wrestler who walked out of the locker room. Magic Man was so confident that he could beat anyone that he said he would cut off his hair if he lost. Mitch Paradise was the next wrestler to walk out. Magic Man changed his mind about wrestling Paradise right then but said he would wrestle him next month if Paradise beat The Executioner. Paradise did beat The Executioner by tap out. 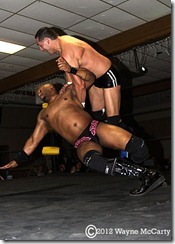 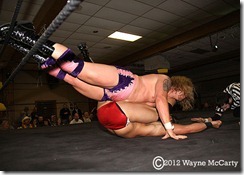 PTW champion Lenny Lane pinned Renny D. Lanes feet were on the ropes and ref Rob Page did not see it. Page should really go to a doctor to get his eyes checked.
Posted by pro wrestling photog at 12:22 AM