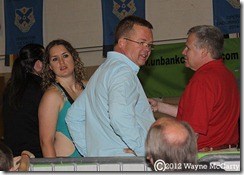 To start things off for the night SDW promoter Ed Hellier and announcer Mick Karch interviewed Jeremy & Heather Halberg. They came out to talk about their handicap match with Miss Natural. 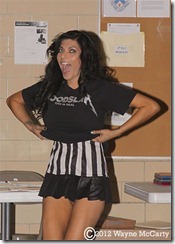 After the Halbergs left the interview area Ed Hellier announced that Shelly Martinez would be the special guest referee for their match. Martinez was at this event as a guest of Heavy On Wrestling. 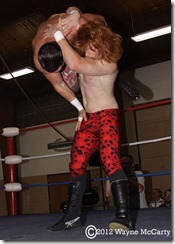 Rookie Ricky Love defeated Ryan Slade. Love was a late addition to the card replacing Matt Murphy who was unable to make the trip to Minnesota. 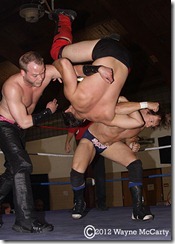 The Junk Squad (Pete Huge & Chris Jordan) defeated Benjamin Sailer & Renny D. Sailer bumped into Renny while was not paying attention to the match. Because of that Renny would not tag in when Sailer tried to tag out. That left Sailer all alone with the Junk Squad. Huge got the 3 count on Sailer after hitting the ‘G Spot’. 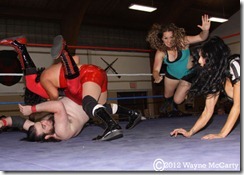 Miss Natural defeated Jeremy & Heather Halberg in a handicap match. Miss Natural pinned Jeremy to get the 3 count from Shelly Martinez. Martinez is the best looking referee I’ve ever seen. 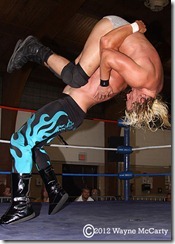 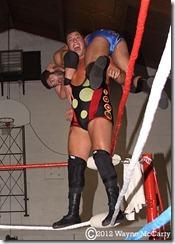 In the main event Colt “Boom Boom” Cabana defeated Arya Daivari. This was Cabana’s first time back in the West St. Paul Armory since 2002. After the match Cabana got on the mic and talked about his time in SDW at the beginning of his career. You can see that promo on the SDW web site which is linked above. After you watch that head on over to Cabana’s Art of Wrestling pod cast and listen to episode #114 to hear him talk about the strange gift that was left for him at this event.
Posted by pro wrestling photog at 9:47 PM