Prime Time Wrestling returned to the Bloomington, MN Knights of Columbus for their second season this past Friday night. The night started with Commissioner Tobin introducing the new PTW champion Renny D. Tobin then brought out Black Stallion and John Johnson, the two wrestlers who would compete in a ‘golden ticket’ match. The winner of the golden ticket match would be able to cash that golden ticket in on any PTW event for a championship match. Lenny Lane then came out to take credit for the golden ticket match idea. 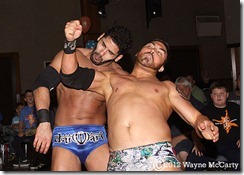 In the opening match Ryan Cruz defeated Arya Daivari with Lilly. Daivari was ready to hit Cruz with a super kick but he tripped on a broom left in the ring by Dorrian the janitor. So after the match Daivari challenged Dorrian to a match next month. 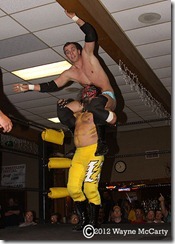 Mikey Wipeout VS Apostle 13 ended in a draw. As the referee counted the pin both wrestlers had their shoulders down. 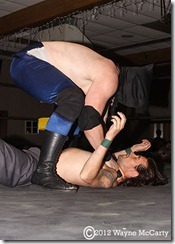 The Executioner  defeated Dorrian the janitor with a mendable claw like choke out. As The Executioner was ready to pick up Dorrian for a chock slam he started freaking out. Not sure what that was all about. 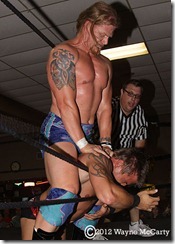 Lenny Lane defeated PTW champion Renny D to become the new champion. This was Renny’s first title defense and he was cheated out of the title by special guest referee Crisco who made a fast 3 count. 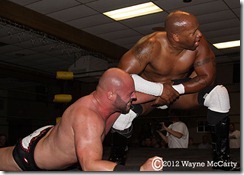 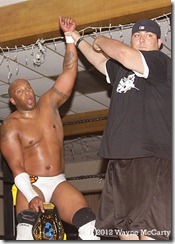 Lane Lane came out after the ‘golden ticket’ match. He announced that he forgot to mention that the champion could also decide when the holder of the golden ticket could cash it in. So Lane brought out his buddy Crisco to ref this championship match against Black Stallion. Crisco’s Extreme Pro Wrestling Radio partner Big D got tired of seeing the one sided officiating that was going on in the ring. Big D then got in the ring and hit Crisco with the title belt. Stallion gave Lane a boot to the face and Big D made the 3 count. That made Stallion the new PTW champion.
Posted by pro wrestling photog at 7:40 PM