Prime Time Wrestling was back at the Bloomington, MN Knights of Columbus this past Friday night. One of the high lights of the October event was the kids costume contest. 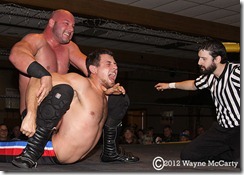 John Johnson defeated Benjamin Sailer in the opening match. This was Sailers debut match for PTW. Last month Johnson knocked some popcorn out of an old fans hand. This time that fan kept yelling ‘you owe me popcorn!”. All I could think of during the whole match was the paperboy in the movie “Better off Dead”. 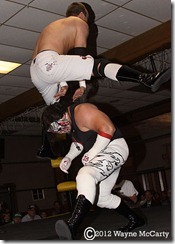 Mikey Wipeout and Apostle 13 once again wrestled without a clear winner. This one ended in a double count out. 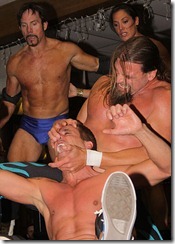 Next up was a tag team match between Mitch Paradise & Zero Kincade and Billy Blaze & Magic Man with Tiger Lilly. This match came about when Kincade came out with an anti bullying sign. He got in the ring and talked about being picked on for being a nerd. Out came Blaze to say that he liked picking on nerds. Then Magic Man and Lilly came out followed by Paradise. In the end Magic turned on Blaze, Paradise turned on Kincade and Lilly turned on Magic. 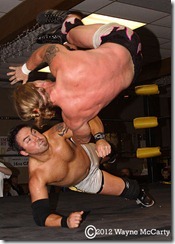 Ryan Cruz defeated Lenny Lane. After the match Lane and EPRW’s Crisco attacked Cruz. Crisco’s EPRW’s co-host Big D came out to help Cruz but he ended up getting whipped with Crisco’s belt. 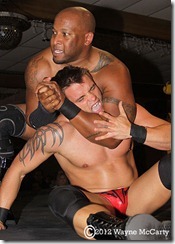