From the Crystal Ballroom in Crystal, MN Northern Impact Wrestling presented a night of wrestling on June 9th, 2006. NIW had a double shot this weekend as they get ready for the NIW Impact Invitational a the end of the month. 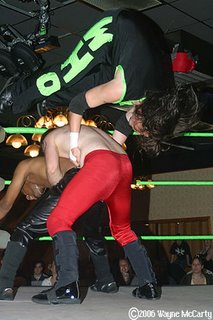 The card started off with a 3 way between Ryan Cruz, Malikite and Trent Jones. Ryan Cruz proved to be the better man in this contest as he pinned Malikite. 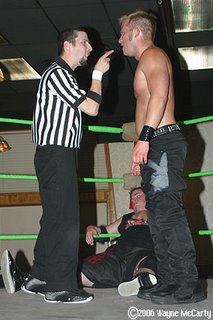 In the second match of the night Pete Huge of the Junk Squad took on Venom. The big man started off by eating a hot dog and drinking a beer but it was not enough to beat the more experenced Huge as he went down for the 3 count after the G-Spot for real. 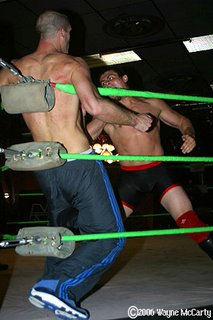 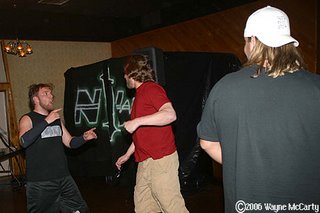 After the match The Big Gunns, Tommy Gunn and Big Daddy Hoofer, came out to challenge the Featured Attraction to a match the next night in Amery, WI. This was The Big Gunns first appearance in NIW. 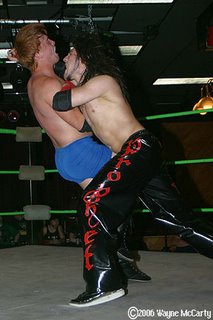 Darin Corbin got a shot at the NIW IMPACT championship title as he wrestled the champ The Prophet. I camera was being a real jerk during this match but after playing with it for a while I was able to get back to ring side to take some photos of this great match. The Prophet retained the title. 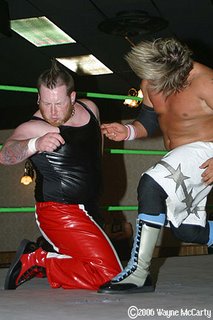 Cody O'Neill picked up a win over Arik Cannon. I think he had a little help from the ring ropes but I'm not sure. It would be interesting to know what the win/lose record is between these two. 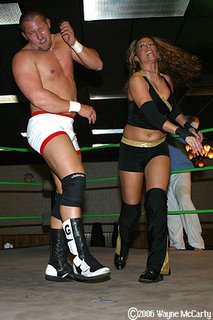 The main event was a tag team match between Junk Squad members Chris Jordan & Horace the Psycopath and Kid Krazy & Rain. Kid Krazy tried to take on Jordan and Horace all by himself as he didn't want Rain to get in the ring and wrestle these two Junk Squad members. But eventually Rain tagged but she probly wishes she didn't now. I've heard that she recieved some injuries from this match. The match ended when Jordan pinned Rain while Krazy was hand cuffed to the ring post.
Check out Vol 8 of The Wrestler/Inside Wrestling as I have 2 photos of Egotistical Fantastico in the mag.
Posted by pro wrestling photog at 7:09 PM