One year ago today, the end of MPW 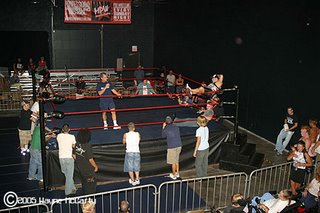 The first photo here is from June 25th, 2005. The last match had ended from the 'monthy' Saturday show at the MPW arena when Terry Klinger AKA Sheriff Johnny Emerald, MPW owner, called all the wrestlers down to the ring and most of the 25 fans were still in the building. As wrestlers were leaving the locker room they were wondering what Sheriff was calling them out for. One of the wrestlers thought that maybe he was going to thank them for putting on a great show even though there were so few fans there. Once all the wrestlers were out of the locker room and around ther ring Sheriff told everyone there that MPW was closing the doors for good after the show tomorrow night. This was the first that any of the workers had heard of it and it had nothing to do with the low attendance that night as it was something that Sheriff had planned for a while. He said that he was done with promoting shows but he was still going to have a training center that would be opening up in 2 months. Upon hearing that the next show would be the last Arik Cannon, then the booker for MPW, started making the matches for the next night which would be a free fan appriciation show. 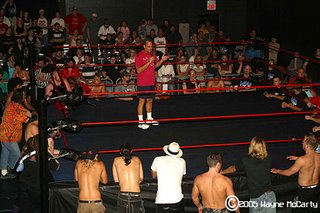 Once again we see Sheriff in the ring but this time with a much bigger audiance as the fans of indy pro wrestling in the Minneapolis area came to this free show to say good bye to MPW. The stands were actually fuller the what is seen here as this was at the end of a very long show. There were 12 matches in all as they tried to get everyone on the current roster in a match. Two trainees even had their first match on this show. A dvd of this event can be purchased from Arik Cannon at his web site.
Posted by pro wrestling photog at 4:20 PM