This past Friday night I went south on I35 to Des Moines, Iowa for 3XW's Divide & Conquer at the Des Moines Social Club. While at the show I got to meet Brian Kelley from Missouri Wrestling Revival. Check out the MWR site for all the latest news on pro wrestling in the central states area. 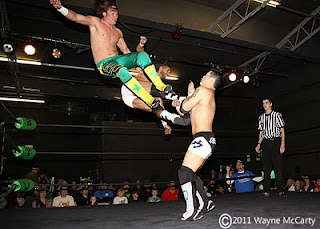 Jimmy Rockwell & Sir Bradley Charles defeated 3XW Pure Wrestling Champion Ricky Kwong & The Mauler with Chad Mylan by DQ. The DQ came when Mylan interfeared in the match. After the match Rockwell challenged Kwong to defend his title on the next card. 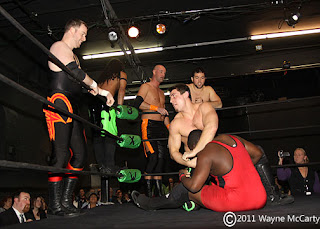 Genisis-Benjamin Sailer, Gage Octane, Nate Bash, Tony Sly & AJ Smooth defeated Jon West, Aaron Masterson, "Big City" Securiy Gaurd, The River Monster & Ryan Slade when Bash pinned Masterson. Genisis is a group of wrestlers who have been with 3XW since the begining and they are out to destroy all those who were not. 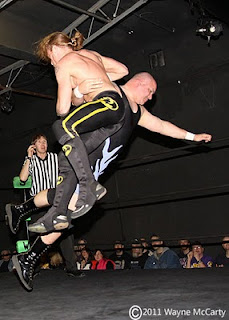 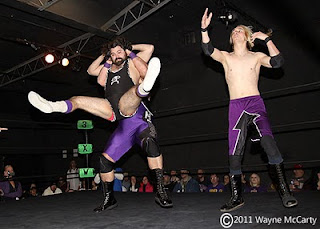 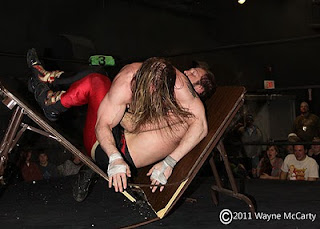 The main event for the night was a 60 minute no DQ Iron Man match between Mark Sterling and Jeremy Wyatt. Sixty minutes was not enough time for these two wrestlers as they were tied at 4 wins a piece so 3XW commisioner Todd Countryman sent this match into over time so there would be a winner to this feud. After about 10 more minutes Sterling got the win after a tombstone piledriver on a chair.
Posted by pro wrestling photog at 10:02 PM

You should come to KC sometime for the Metro Pro Wrestling gigs. Your photos are much better than the ones I've seen. Great work!

Thanks for the compliment Sarah. I've heard great things about Metro pro Wrestling. Hope to someday make it down there someday.