PWI shoots on the AWA

The March 2011 Pro Wrestling Illustrated special year-end awards issue went on sale this week. It's always a fun time seeing who the fans voted for and their Unofficial/Official awards. Another one of my favorite sections is the year in review in photos. Most of the photos in this section take a humorous look at pro wrestling. In this issue a few of my photos were used to take a shot at the old AWA. The photos used were Buck "Rock N Roll" Zumhofe showing his ass to his opponent and Greg Gagne drop kicking Mitch Paradise. The caption read "Two reasons why no one is clamoring for an AWA reunion". Being from the Midwest the AWA was my introduction to pro wrestling and it holds a special place in my heart. So I was a little disappointed with the caption for my photos. Sure, no one really wants to see Zumhofe's back side but a Gagne drop kick is another story. 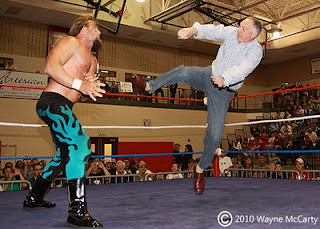 This image to the right was taken just a second before the one that was printed in PWI. Sure, Greg Gagne didn't get as high as he used to but he's around 60 years old now. Not only that but he was wearing dress shoes when he did the dropkick on 6' 5" Mitch Paradise. Even though Gagne has lost a little spring in his dropkick, it got a huge pop from the crowd at the Lakeville high school. Maybe even the biggest pop of the night. But the writers at PWI are right. As cool as it was to photograph a Gagne dropkick, I would not want to see him team up with Jim Brunzell to take on The Destruction Crew in a full match. 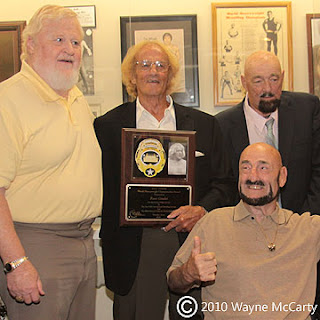 This past summer I was at an AWA reunion of sorts when I went down to Waterloo, Iowa for the George Tragos/ Lou Thesz Hall of Fame inductions. There I got to meet such AWA legends as Larry "The Ax" Hennig, Rene Goulet, and the Vachon Brothers, Butcher & Mad Dog. Another AWA great who was at the HoF weekend was Baron Von Raschke.
Posted by pro wrestling photog at 7:10 PM