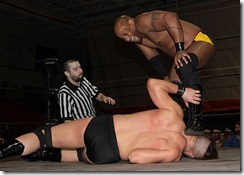 In the opening match The Black Stallion pinned “All Star” Paul Brewski. 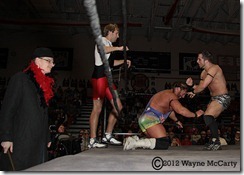 “6% Body Fat” Rob James beat “Livewire” Johnny Parks with the lipo buster, aka Canadian destroyer. This was actually a tag team match with James and Parks teaming with teachers from Monticello High School. After the match James told his partner to kick Parks while he was down. Teachers are really good guys so all the teachers pummeled James. 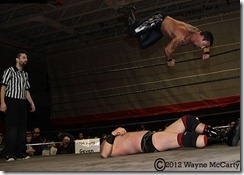 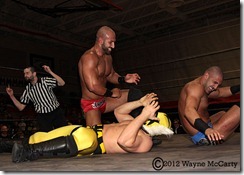 The main event was a royal rumble with all the wrestlers from the four previous matches minus the teachers and Wildcat. Benjamin Sailer was also in the rumble but he didn’t last long. No wonder the AWF doesn’t book him. Johnny Parks was the winner of the match when he skinned the cat and pulled Rob James out to the floor.
Posted by pro wrestling photog at 1:15 PM