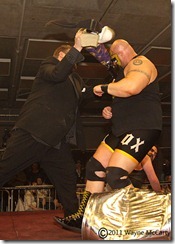 The March 2012 Awards issue of Pro Wrestling Illustrated  has a photo from last years Heavy On Wrestling show featuring Heavy D and Ox from the Barking Spiders. The photo appears on page 24 in the “year in review” section, which could be called the “year in funny captions’. The funny caption for the photo, which was taken seconds before the one shown here, has to do with Zach Gowen missing his prosthetic leg. 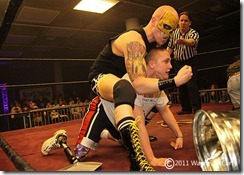 This issue of PWI should be on news stands now. If you can’t find it on the magazine racks at your local store you can order it from their web site, pwi-online, for only $5.95. That’s $4 off cover price. PWI is now also available in digital format for only $4.99. A yearly subscription cost only $29.95.

Posted by pro wrestling photog at 7:00 AM