This past Friday night at First Ave night club F1rst Wrestling presented "The Return:09". The last 3 years F1rst Wrestling has presented a returning wrestler and this year the returning wrestler was Sean "Xpac" Waltman who last appeared in a wrestling ring in Minneapolis back in '99 for WWE's Summerslam at the Target Center which is across the street from First Ave. Waltman contacted F1rst Wrestling and asked for a match on this card against Jerry Lynn, a man who Waltman wrestled against back in the early '90's here in the Minneapolis area and around the world. The two also tag together before Waltman went to the WWF.
I had some tecnical diffaculties with my camera so I was unable to photograph all the matches on this card. Big thanks to Dave Webber who let me use his camera. 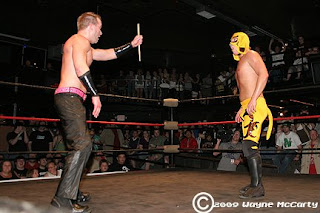 In mixed tag team action "Playboy" Pete Huge and Allison Wonderland defeated Yellowdog & Sharkgirl. This was my fist time seeing both Yellowdog and Sharkgirl in action and I think this is the first time these two tagged together. 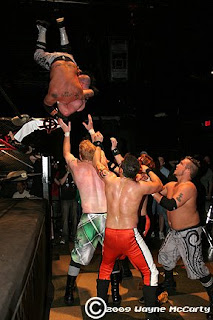 The match that was advertised as Cody O'Neill's last match was changed to a 6 man match. O'Neill teamed with Aaron Corbin and his twin Cory O'Neill while Arik Cannon had Darin Corbin & Ryan Cruz as his partners. After the suplex to the outside as shown in the photo, Aaron, Cory, Ryan and Darin fought each other to the locker room and that left just Cannon and O'neill to finish the match. Cannon got the pin on O'Neill after a glimmering warlock. The crowd gave O'Neill a standing ovation. 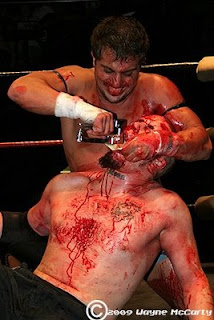 "6% Body Fat" Rob James defeated CZW Ultraviolent Underground Champion Danny Havok in a Minneapolis death match. This match was very bloody as Havok had a huge cut above his right eye. James got the win after a falcons arrow on to a pile of thumb tacks. 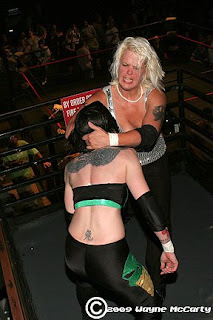 Ann Brookstone pinned Daffney in a falls count anywhere match. This match even went into the mens room where Daffney put Brookstones head in the urinal troft. YUCK! 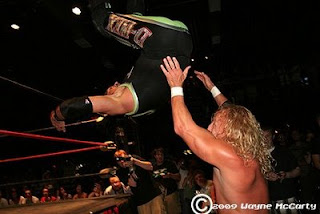 In the main event Sean "Xpac" Waltman pinned Jerry Lynn. Before the match even started fans were chanting "This is Awesome!" And it was. Go to F1rst Wrestling's MySpace to order this DVD which should be ready in about a week or so. It will be a 2 disk set with exta interviews with Waltman and Lynn.
Posted by pro wrestling photog at 6:53 PM