Japanese pro wrestling referee Ted Tanabe died on June 15th, 2009 after he had a heart attack while refereeing a match for Osaka Pro Wrestling in Japan. 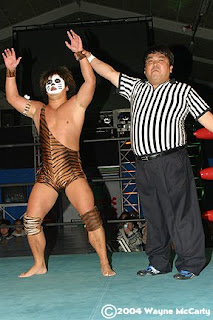 On February 8th, 2004 I was ring side at Blue Field in Ciba Japan for a Kaientai Dojo show where Tanabe was one of the referees. Tanabe was the first one I met at Blue Field as he was the one who got me my press pass. In the photo above Tanabe is raising Tsubo Genjin's hand to award him the match. 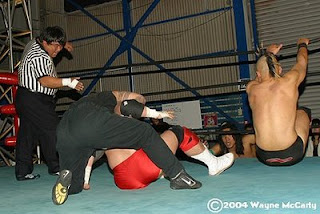 Tanabe was one of the most well know refs in Japan. There is even a referee in the Fire Pro wrestling video game that looks just like Tanabe.
Posted by pro wrestling photog at 6:40 PM