The American Wrestling Federation held their last fund raiser show for the school year this past Saturday night at the North Branch, MN high school. This event was tapped for the AWF TV show Saturday Night Slam which airs on channel 45 at 6:30pm in the Minneapolis/St. Paul area. 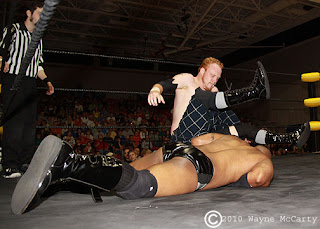 In the opening contest Aaron Corbin w/ John Johnson defeated The Black Stallion. It looked like Corbin may haved used the ring ropes for leverage to get the three count. Referee Rob Page didn't see it so it must not have happened. After the match Corbin and Johnson attacked Stallion untill Johnny Parks came out to make the save. 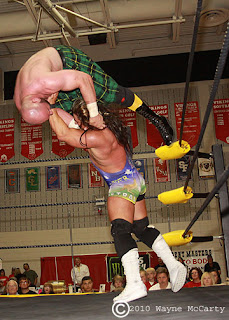 With both John Johnson and Johnny Parks already at ring side ref Rob Page made that the next match. Parks got the win over Johnson with a little help from a special guest enforcer referee who I believe was a member of the North Branch wrestling team. 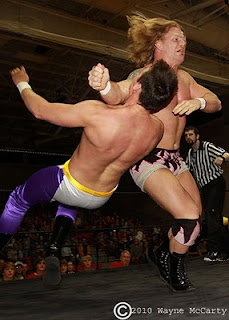 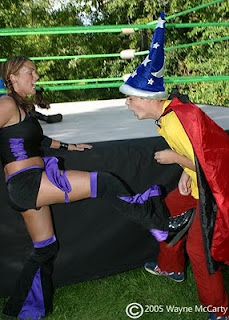 Five years ago Clemson was getting a taste of pro wrestling as a manager called The Wizard. In the photo here from an NIW card in August 2005 the Wizard is getting a kick to the jimmy from former midwest female wrestler Rain. These days Rain can be seen on Mexico's AAA TV program on Galavision and on Wrestlicios as Felon. Head on over to Rain's web site and buy some photos that I have taken of her- The Radiant Rain 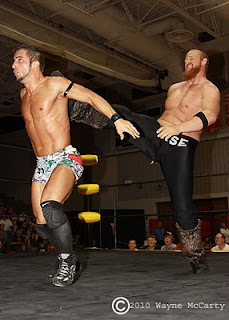 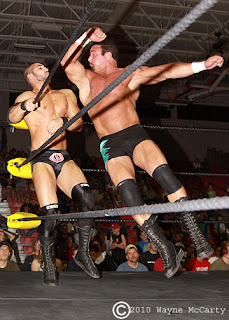 AWF heavy weight champion Tony DeNucci defeated Arya Daivari to retain the belt. It looks like Daivari forgot to pick up his laundry at the dry cleaners as he didn't have his aladdin pants and carpet. DeNucci got the pin after a frog splash.
Posted by pro wrestling photog at 8:12 PM