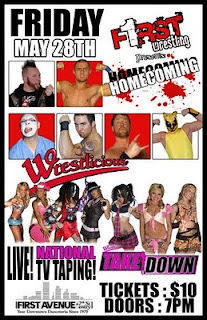 This coming Friday night, May 28th, F1rst Wrestling returns to First Ave for the first time since December 2009. The main event for this card is a no DQ match between Arik Cannon and Horace the Psychopath. There is also a four way match between "The Professional" Benjamin Sailer, "Big" Brody Hoofer, "Playboy" Pete Huge and "6% Body Fat" Rob James. Also scheduled is a tag team match, The Northstar Express VS The 5-0. In addition to the F1rst Wrestling matches there will be a TV taping for Wrestlicious! If you liked GLOW then you will love Wrestlicious. Announced so far appearing for Wrestlicious are Cousin Cassie, Juvi Hall, Coco Montego (Josie/Sojo Bolt), Glory the All American Girl (Christie Ricci), Faith "The Naughty Girl" (Portia Perez), White Magic (Lacey) and Marley "the Hippie Chick" (Daizee Haze) 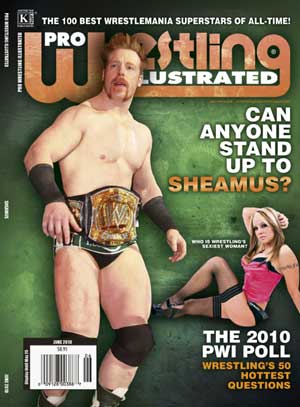 The June 2010 issue of Pro Wrestling Illustrated featured a photo of Sheamus that I took on the cover. More of my photos from that same WWE house show can been seen in the July and August issues of PWI on news stands now.
Posted by pro wrestling photog at 9:40 AM