This past Saturday night at the Lakeville South high school Steel Domain Wrestling returned to the Minneapolis/St. Paul area for the first time in over 5 years. Promoter Ed Hellier put on this "One Night Only" event for the Lakeville, MN high schools to raise funds for the grade 9 sports. 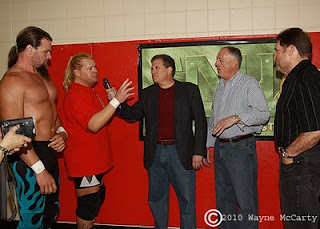 After the tag team match Mick Karch and Ed Hellier did a TV taping opening. Karch then introduced George Schire who then introduced The High Flyers, Greg Gagne & "Jumping" Jim Brunzell. As Gagne and Brunzell were reliving their past as AWA tag team champions they were interrupted by Mitch Paradise & Adrian Lynch. 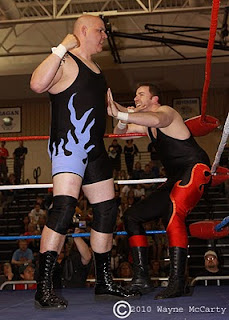 In the official first match of the night Brain Ash defeated Gage Octane. The last time I saw these two wrestle was October 2007 in a looser leaves 3XW match. Ash lost that match and left the ring for over 2 years. 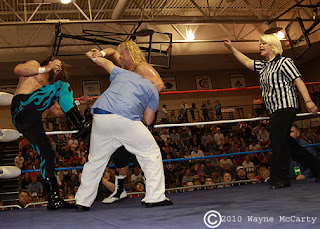 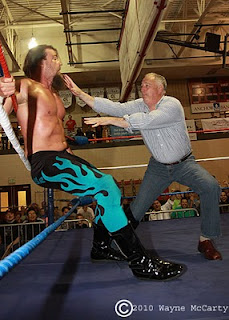 After the match Lynch got on the mic and called out Greg Gagne. Lynch said Greg was old and a coward. Gagne came to the ring showing now fear and he was attacked by Paradise while Lynch distracted him. Gagne got the upper hand by giving Lynch a back body drop and a drop kick to Paradise's face. Growing up I was a big fan of the High Flyers and really liked their drop kicks. It was quit a thrill to be at ring side photographing a Gagne drop kick. If you've ever seen the movie The Wrestler staring Vern Gagne you know that no one gets up after a Gagne drop kick. 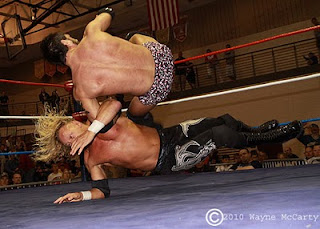 Two former ROH champions faced each other in the next match. Jerry Lynn got the 3 count on Austin Aries after a cradle piledriver. 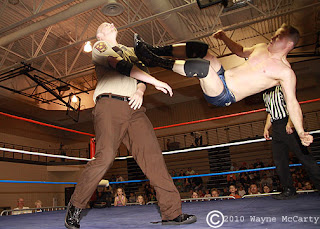 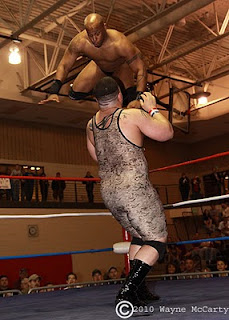 In the semi main event WWE's Bam Neeley (Magnus Maximus in SDW) took on current NWA heavy weight champion "Scrap Iron" Adam Pearce for the vacated SDW championship. Neeley got Pearce to put the NWA belt on the line for this match. During the match Neeley tossed Pearce over the top rope and according to NWA rules that is a DQ so the NWA title stayed with Pearce. 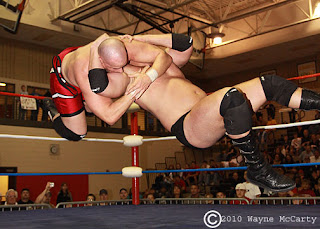 Bam Neeley got the 3 count on Adam Pearce after this move pictured above. 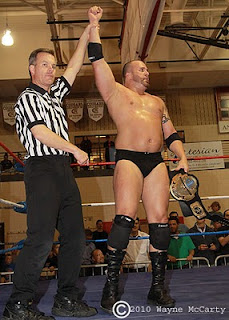 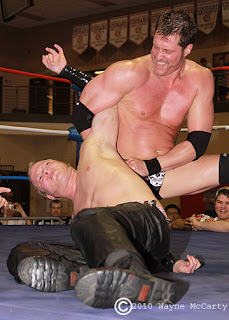 The main event for the night was a lumber jack/hair cut match. Representing Lakeville North was "Playboy" Pete Huge with Austin Aries leading the North football players/lumber jacks out side the ring. Lakeville South was represented by Brody Hoofer in the ring and Jerry Lynn on the outside. The coach of the loosing side would have to have his head shaved after the match. Hoofer got the win for Lakeville South but in heel fashion the coach from Lakeville North made one of his football players get his hair cut instead.
Posted by pro wrestling photog at 12:26 PM