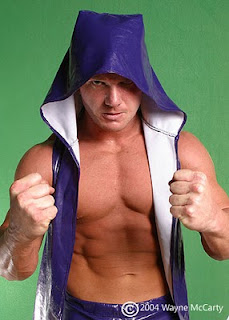 The 20th annual Pro Wrestling Illustrated 500 hit news stands a couple of weeks ago. Former TNA champion AJ Styles was named the #1 for the grading period of June 1st, 2009 through May 31st 2010. This was the first time that a TNA wrestler was named #1 in the PWI 500. The photo here was taken back in January 2004 when he came to Midwest Pro Wrestling to face Shifty. 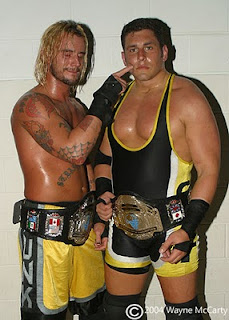 Ranked #3 on the list is CM Punk. In the photo Punk is with Colt Cabana (#101) after they won the ROH tag team titles in Chicago Ridge, Il in April 2004. A little bit of a role reversal as Punk is showing his less serious side. Cabana recently started a podcast called "Art of Wrestling" that can be found at welovecolt.com and on itunes. So far he has done 4 episodes that have featured Shawn Daivari, Punk, Chad Collyer and Bull Pain. I've listened to all 4 shows an really enjoyed them. They are funny and informative. If you are a fan of pro wrestling then you really should listen to Art of Wrestling. Then email him and tell him I told you to listen to his podcast.
I have four photos in the PWI 500, Randy Orton, Jack Swagger, Cody Rhodes and Chris Masters. Go out and buy an copy now. If you can't find the 2010 PWI 500 on news stands you can now order it on line at the PWI blog.
Posted by pro wrestling photog at 11:04 PM

Sweet blog, I hadn't come across midwestindywrestling.blogspot.com earlier in my searches!
Carry on the superb work!