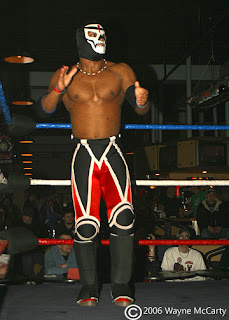 I was watching the August 28th episode of Lucha Libre USA on Mtv2 this past past weekend when I saw a familiar masked warrior, Mentallo. It was at an XJAM card in Minot, ND in January 2006 were I first met the masked man from Canada. That's one of the joys of being a ring side photographer at independent pro wrestling shows. One day you see a wrestler at a bar/armory in a small Midwest town and a few years later that same wrestler can be seen on national TV. 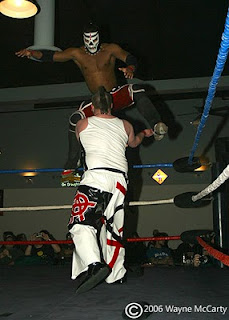 The first time I saw Mentallo he was a fan favorite when he wrestled against Arik Cannon at the Udder Palace in Minot, ND. On Lucha Libre USA Mentallo is a rudo, the lucha libre term for bad guy. It was made clear that he was a rude when he was shown pick pocketing some lady on the streets of Las Vegas in a clip on Lucha Libre USA before his match with Azteco.
Posted by pro wrestling photog at 10:42 AM