3XW held their first card in their new building, $1 Fitness on this Saturday night. $1 Fitness is in a building that used to be a boat showroom. 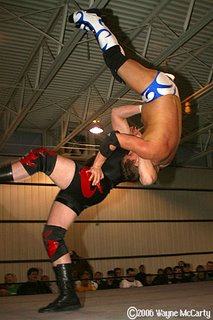 The opening match saw Gage Octane get pinned by Jaysin Strife. This was my first time seeing Strife and he reminded me of Matt Sydal a little. 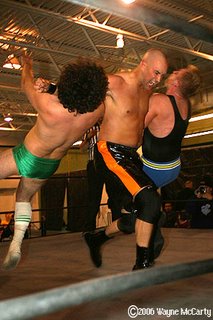 The next match was a tag team match that was set up the month before. The team of Casanova & Devin Carter beat Tony Sly & Matty Fitness. 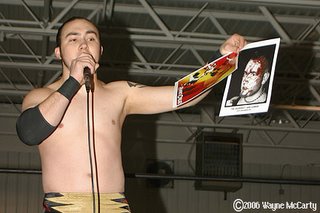 The third match of the night was between Arik Cannon and Ryan Cruz. This match was for Cannon's 3XW cruiserweight title but Cruz decided to add a little more compition to their contest. He challenged Cannon to a good old fashioned 8x10 sell off. Cannon retained his belt and sold more 8x10's. 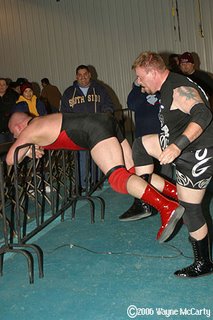 Next up was a title unification match between the 3XW heavyweight champion Brian Ash and the 3XW North American champion Big Dog Barber. The ref had his work cut out for him before the bell even rang as he had to remove about 5 foriegn objects from each champion. The both made good use of all the exercise equipment in the arena as they battled outside the ring. In the end it was Ash who got the win and both titles. 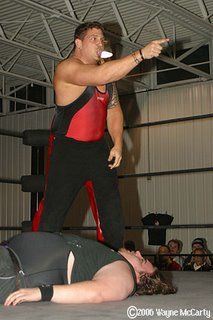 Tony Scarpone beat the Freak in the second to last match of the night. Scarpone is a great bad guy. 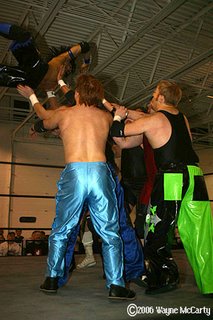 The main event of the night was a 20 person battle royal. In the photo to the left Nate Bash entered the rummble by doing a 'stage dive' on to a group of wrestlers in the middle of the ring. They body surfed him right over the top rope but he landed on the ring apron and was not eliminated. Egotistico Fantastico won the battle royal rumble when he tossed Gage Octane over the top rope to earn a title shot at the 3XW heavyweight title.
Posted by pro wrestling photog at 11:53 AM