Northern Impact Wrestling presented a card at the North Star Event Center in Amery, WI. About 100 paid to see the show. 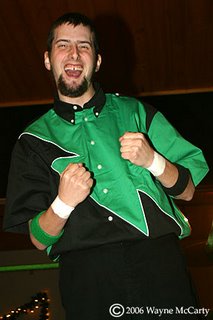 Ref Rob Page shows off his new NIW ref shirt. It's a bowling shirt believe it or not. I like the new look but Rob needs to get a shirt his size. 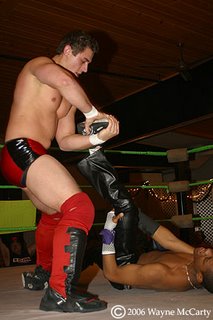 The Professional Benjamin Sailer beat Malikite. The The foreign object that Malikite hide in the top turnbuckle pad fell and almost hit me on the head. Its dangerous around ringside. 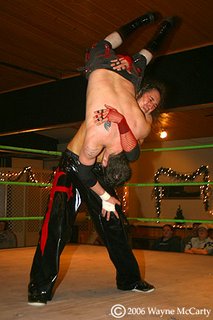 In a match to unify the two NIW singles titles The Prophet beat AL B.C. by DQ. So no titles changed hands. 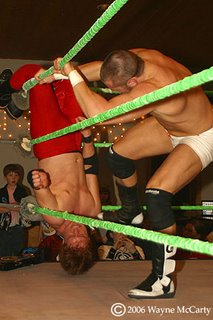 The North Star Express held on to there tag titles as Ryan Cruz got the pin in this 3 way tag team match. The other teams were Venom/Chris Jordan and Dan Otep/Trent Jones. Chris Jordan (in photo to left kicking Darin Corbin) was a replacement for Cory O'Neill who decided he wanted to go to the Neo Pro show instead. The match ended with a little disagreement between Cruz and Corbin but they patched things up before they left the ring which is good because they are a good tag team and there are not many of those around. 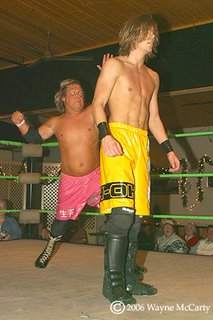 Kid Krazy beat Cody O'Neill. Boy were the fans into this match. In the end Kid Krazy hit Cody with the Canadian Destroyer for the win. This pissed off Cody so he attacked Krazy. Maybe Cody was a little upset that his brother Cory went to that neo pro show so he took it out on Krazy. 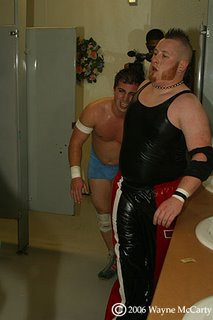 The Punisher Rob James beat The Anarchrist Arik Cannon in an Amery street fight. I have photographed these two in singles matches against each other a bunch of times in the last 6 months and this one was one of their wildest yet. Cannon gave James a swirly. Yes, a freakin swirly and I do have the photos to prove it. I hope Cannon checked to make sure the last woman in that stall flushed. The crowd really got nasty during this match as the chanted 'you suck cock' in reference to James. Sure it was a bar show but there were some young kids in the crowd. Which reminds me, I hate bar shows where smoking is allowed.
Posted by pro wrestling photog at 7:01 PM