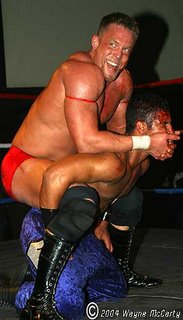 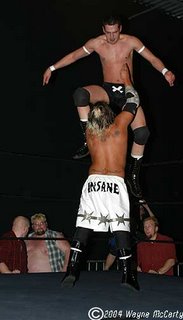 In another card from 2 years ago we have a lumberjack match that took place at the old MPW arena in Maple Grove, MN on 3/27/2004. The two men in the lumberjack match are Kaos Cody O'Neill and Prettybooooy Delgado. Today Cody is one half of the Neo Pro tag team champions with his twin brother Cory but his opponent in this match is out of the biz.
Posted by pro wrestling photog at 4:32 PM