Northern Impact Wrestling debuted in Bloomington, MN at the VFW. I really like this location for 2 reasons. 1. It's in a bingo hall. 2. It's only a few miles from my home. One bad thing about this bingo hall is the low ceiling but it's better then the VFW in Forest Lake. 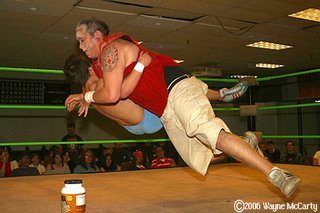 In the opening match The Badman beat The Punisher Rob James. James even tried to blind The Badman with some of his powdered protein mix. 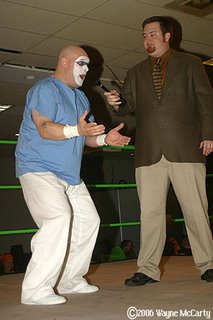 NIW owner Frosty came out to interview Horace the Psychopath who was scheduled to make his return to the ring after a 15 month absence. The last time Horace was in the ring was as a commissioner for Neo Pro. Horace said that he came to NIW for the fresh blood of all the young wrestlers there but he didn't say who was #3 on his list. #'s 1 and 2 on his list do not wrestle for NIW. 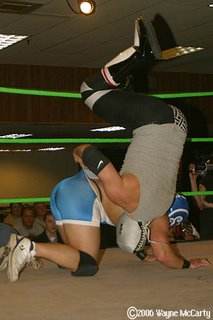 El Bandito de Plata won by count out when The Big Bad Booty Daddy's singlet was stuck under a chair that was being sat on by a fan. One of the oddest finishes to a match I've ever seen. 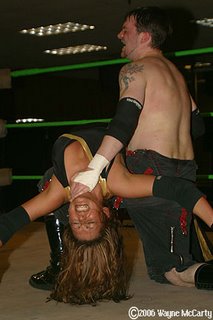 Al B.C. held on to his NIW title a little longer as he beat Rain with a little help from The Boss who has not been seen since Nora Greenwald pulled his pants down and Rob Page gave him a stone cold stunner on 1/08/2006. 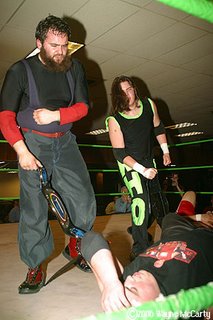 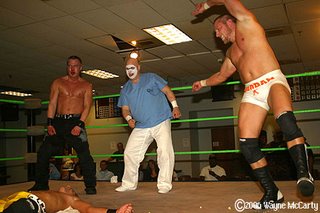 The Junk Squad added a member to there team as they took on The Prophet and Kid Krazy. The Prophet was hand cuffed to the ring post and NIW commish Frost got on the mic and asked for some one from the back to come out to be krazys partner. O'Brian answered the call but was met with chair to the head from Chris Jordan. Horace came out to get the tag from Krazy but he attacked Krazy and danced with the Junk Squad.
Posted by pro wrestling photog at 5:51 PM