From First Ave in Minneapolis, MN Midwest Pro Wrestling presented 7 matches on this last Tuesday night of March 2006. With my wife at 3 days past the due date of our baby she still didn't feel it happening yet so with her blessing I went to the monthly MPW card. 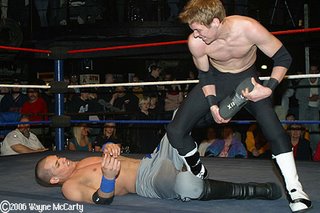 In the opening match Tony Money beat Craven Knyte. These two are some of the newest MPW academy trainees and have, I believe, lest then 5 matches between both of them. They both have different gear since the last time they wrestled. Knight lost the tank top he used to wear and it looks like he got rid of the moon boots. In Money's first match he didn't even have gear so it's great to see him look like a wrestler this time. 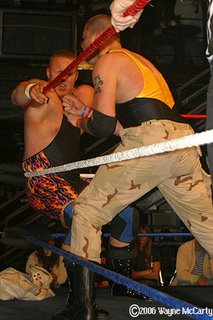 In the second match of the night it was Germany Vs the U.S.A. as The Asylum wrestled Corp. Alexander. This was Alexander's First Ave debut and only the third time I've seen him wrestle. The first two times he wrestled as Roman Dinari. Now he is a 'war vet'. The Asylum picked up the win with a little help from his manager Vinnie Banks. 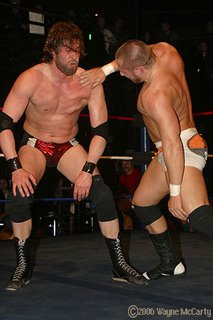 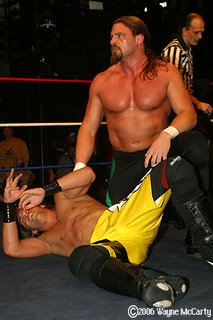 Mitch Paradise beat Kid Krazy in a rematch from 2 months ago. This time Krazy didn't bleed. Go to Kid Krazy's myspace page to message him to let him know you want to buy his dvd. 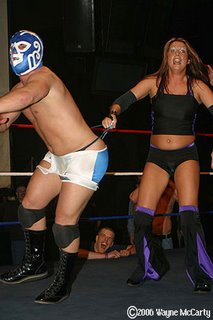 Rain was to face Jessica Dalton in a lumberjack match but Dalton no showed. Not sure whats going on with Dalton but she missed the last two cards she was scheduled on here in this area. With Dalton out of the match The Big Bad Booty Daddy happily took her place. Rain beat BBBD with a lung blower after he got a little too fresh with her. 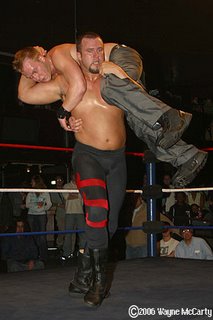 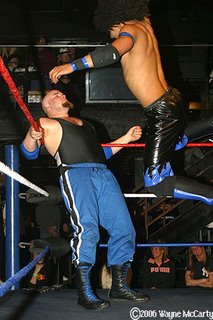 MPW cruiserweight champion Nate Bash defeated Zero Kincade. I was disappointed with the lack of respect some wrestlers in the crowd showed this match.
Posted by pro wrestling photog at 12:57 PM