On Easter Sunday 2004 a new promotion in the Minneapolis area debuted @ the West St. Paul Armory. The closest this promotion had to a name was Promociones Renegado which is named after the owner Renegado Estrada. At this time there were plenty of wrestling promotions in the twin cities area but this one was catering to a different crowd, the latinos of the area. I guess the Lucha cards in Mexico cost more as the tickets for this $25! That's a lot for an indy wrestlign show but they did bring in some big names from south of the boarder as the big 6 man tag main event featured Tinieblas jr, Piloto Suicida & Huracan Ramirez VS Poison, Acero Dorado & Frankistein. Yes, Frankistein. But the card was not filled with lucha wrestlers only as some of the top local talent was on featurd as well. Sadly this promotion lasted less then a year. 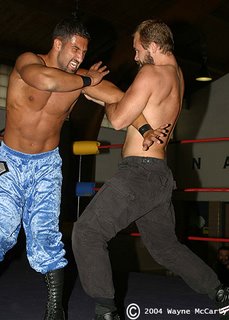 In the opener Shawn Daivari lost to Werner from Chile. 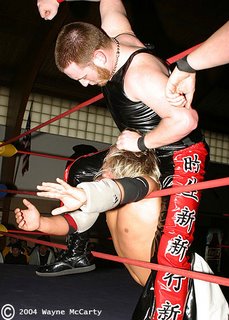 Arik Cannon wrestled Kaos in what would be their last time in the ring together for about a year. 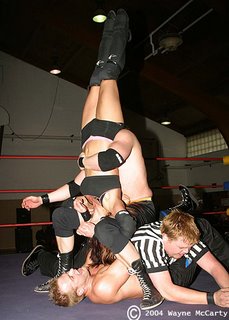 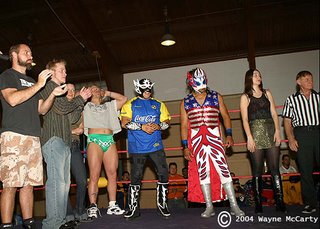 All the wrestlers were brought to the ring for something but I don't know what because I don't speak spanish. 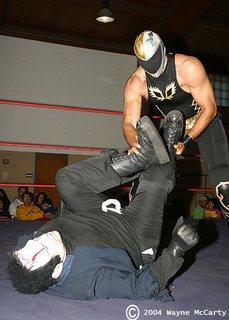 Yep, that's Frankistein (that's how it's spelled on the flyier). This 6 man lucha match was just insane. The crowd was going wild and I had no idea what the rules were or what was going on. This was as close as I could be to being at a lucha card in Mexico with out being in Mexico. 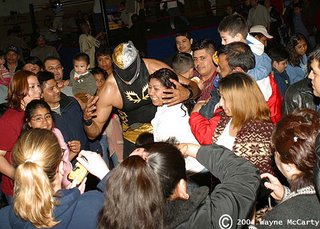 After the card the fans crowded around Tinieblas jr for photos and autographs.
Posted by pro wrestling photog at 5:44 PM