F1rst Wrestling returned to First Ave in downtown Minneapolis, MN with a card named Minneapolis Massacre. I missed the last F1rst Wrestling card that was held at the West St. Paul Armory at the end of January as I was on vacation. 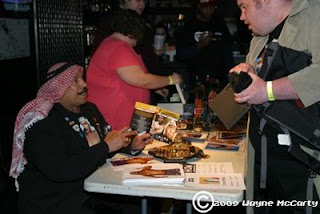 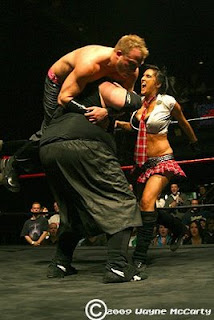 In the opening match The Junk Squad defeated 101 Proof in a tag team contest. As you can see in the photo here Pete Huge of the Junk Squad got some help from his valet Allison Wonderland. Venom was pinned by Huge after Wonderland kicked him in the balls. Huge was suppose to wrestler two roller derby girls after one of them hit him in the balls last time at First Ave but the roller derby girls could not appear at F1rst Wrestling by orders of their league officials. Something about roller derby being above pro wrestling. 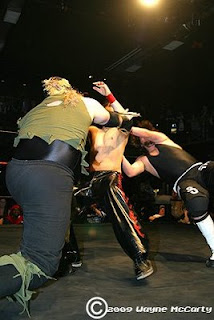 In the next match Udo defeated The Prophet, Pierre Abernathy and Gary J in a 4 man match. This was my first time seeing Abernathy and J. I believe they came up from the St. Louis area. 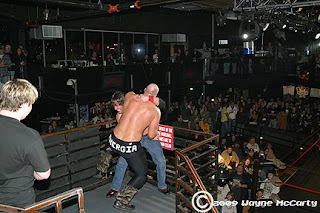 Brody Hoofer defeated Thoruf Marius in a falls count anywhere match. There were no introductions for this match as the wrestlers started fighting back stage. These two big men took this match all over First Ave, the even went into the woman's bathroom. Hoofer finished off Marius with two chair shots to the head and a body slam on the stage. 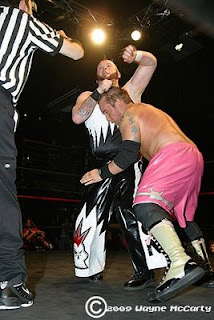 In the battle of former friends Arik Cannon defeat Cody O'Neill. After his lose O'Neill challenged Cannon to more more match. That match will be O'Niell's last match ever. O'Neill has some nagging injuries so he wants to hang up his boots for good. 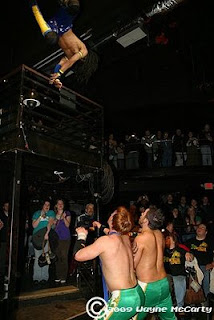 Midwest Ground & Air kept their unbeaten in Minnesota streak alive by once again defeating Northstar Express. Towards the end of the match Nate Bash climbed off of Darin Corbin's shoulders and on the the the stairways. From there Bash jumped down on to Corbin and Ryan Cruz. 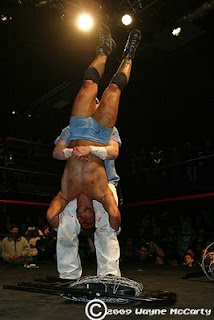 The main event on this night was an Extreme rules match between Rob James and Horace the Psychopath. This was a very brutal match with thumb tacks, barb wire baseball bats, barb wire chairs and a flaming table. Well, it would have had the flaming table if they hadn't used a fire proof table. After trying to lite the table on fire unsuccessfully Horace put a barb wire wrapped chair on the table and power bombed James through it to get the 3 count. This was a very bloody and brutal match.
Posted by pro wrestling photog at 6:35 PM No comments: 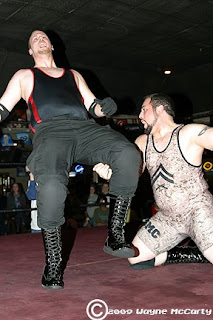 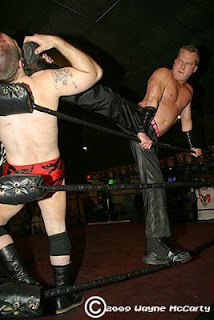 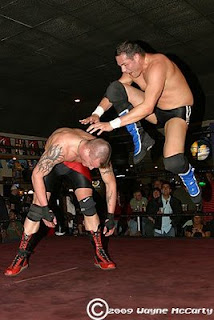 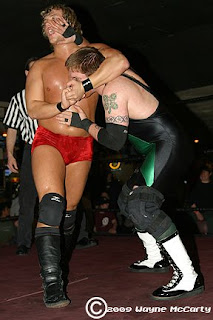 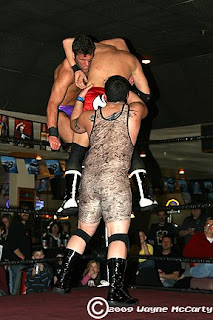 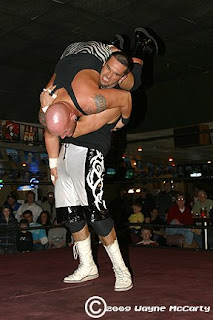 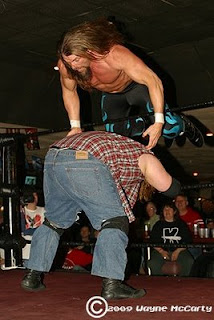 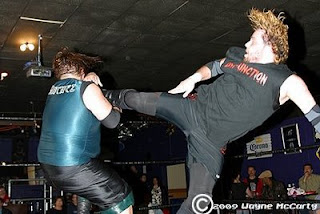 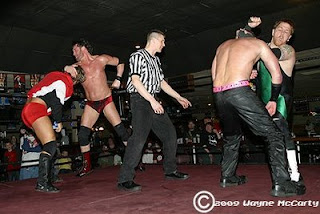 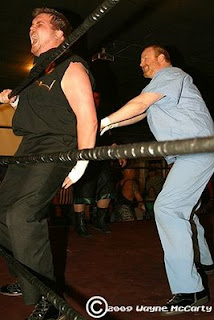 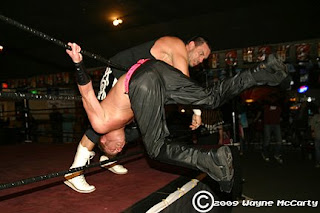 K-Train won the Roberts Rumble when he clothes lined Pete Huge over the top rope.
Posted by pro wrestling photog at 3:24 PM No comments:

Minnesota Independent Wrestling returned to a full house at the Chanhassen American Legion this past Saturday night. On this night two wrestlers made their return to MIW. 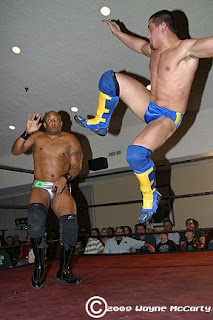 In the opening contest "The Professional" Benjamin Sailer defeated The Black Stallion with a top rope sunset flip. 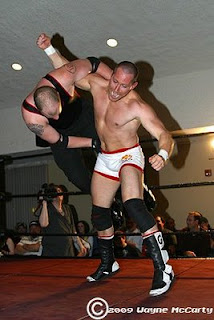 The first of the two returning wrestlers on this night was "The Genuine Article" Chris Jordan. Jordan defeated rookie "The Law" Mark Barker. This was my first time seeing Barker as "The Law". Barker has gone through a few different names in the past 6 months and I hope he sticks with this one. It's been a while since there has been a man of the law in the MSP area. 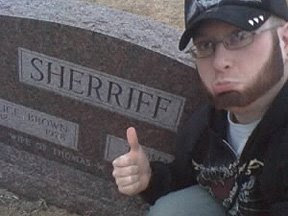 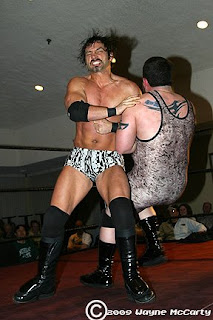 The second wrestler of the night to make their return to MIW was Austin Aries. Before the first bell of the night Aries came out and made a challenge to anyone in the back. Cpl. Julio Julio came out to accept the challenge. Aries revealed that Julio was one of his trainees and he tried to talk Julio out of the match. Aries won the match of teacher vs student when Julio missed a move using the ropes and Aries put him away with a brain buster. 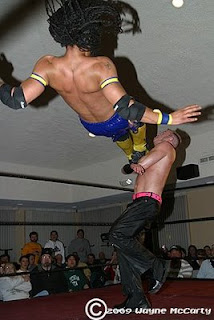 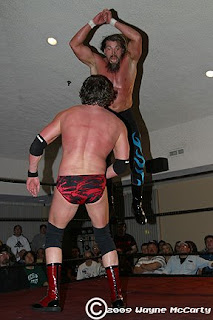 Mitch Paradise became the new MIW heavy weight champion when he defeated Brody Hoofer. Paradise had a little help with his win as The Black Stallion and came out to distract the ref and Huge hit Hoofer with a chair.
Posted by pro wrestling photog at 3:12 PM No comments: