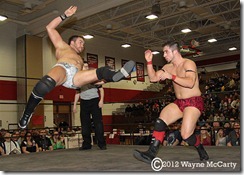 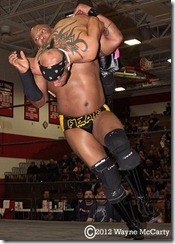 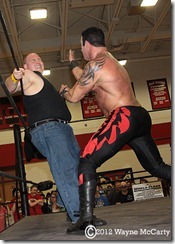 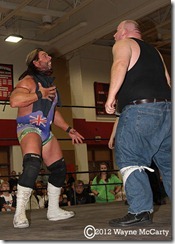 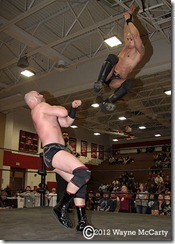 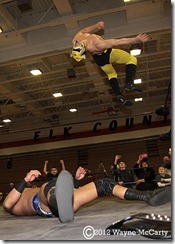 AWF World champion Wildcat defeated former champion Arya Daivari in a no dq match. After his victory Wildcat wanted to celebrate with an adult beverage but the bar tender wouldn’t serve him with the mask on.
Posted by pro wrestling photog at 2:17 PM No comments: 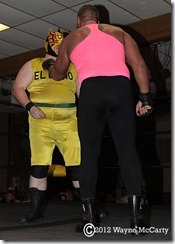 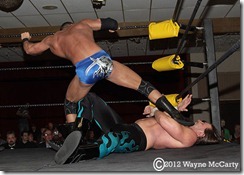 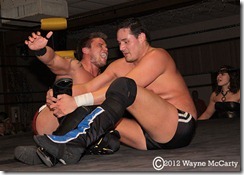 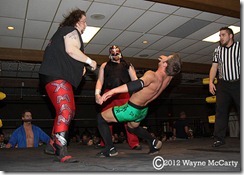 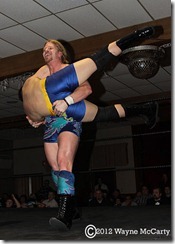 PTW champion Lenny Lane retained the title against Chiropractor DC. The match was first awarded to DC when he got the three count on Lane. But when the referee raised DC’s hand brass knuckles fell to the mat and the referee then awarded the match to Lane.
Posted by pro wrestling photog at 9:58 AM No comments:

This past Friday night 3XW held their “Divide & Conquer” card at All Play – Baratta’s Forte Ballroom in downtown Des Moines. It’s been a year since I last made my way down highway 35 to 3XW. I really like the new set up that they have at this place. Next to the entrance ramp there is a ‘jumbo-tron’ where entrance videos and promos are shown. 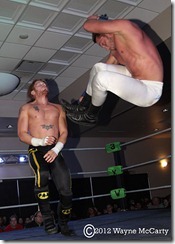 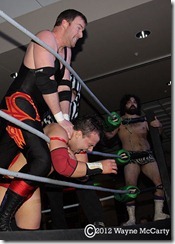 Gage Octane & Casanova with Todd Countryman defeated Barry Ryte & Ray Stryker. The rookies Ryte & Stryker were no match for the members of Genesis. At least I think Ryte & Stryker are rookies because I’ve never seen them before. 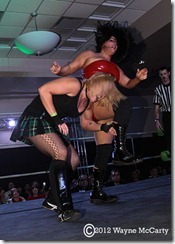 Miss Natural pinned Stacy O’Brian. This was the first match for these two at 3XW. Last time I saw Miss Natural was back in 2004 at First Ave when she team with Angel Williams (aka Angelina Love) to take on O.D.B. & Josie. 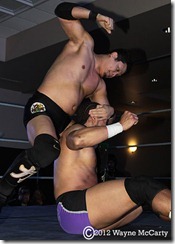 Ricky Kwong with Chad Mylan pinned Sir Bradley Charles. SBC was distracted when some anarchist appeared on the ‘jumbotron’ and Kwong rolled him up for the three count. 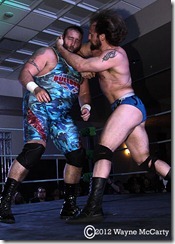 3XW Heavy weight champion Mark Sterling defeated Maddog McDowell with Skylar Pierce to retain the title. After the match Sterling put the boots to McDowell. Jon West came out to save his American Bulldog tag partner but ended up getting beat up by Sterling. 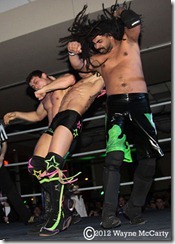 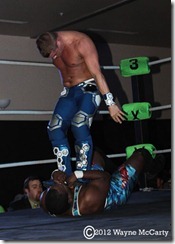 Jaysin Strife pinned “The American Fury” Jon West with Skylar Pierce. West was holding his sore neck from when he got beat up by Sterling earlier. 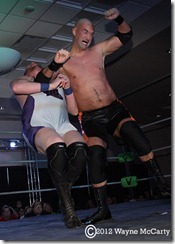 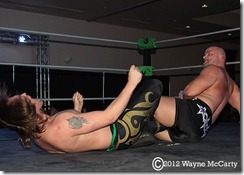 The main event was an NWA World heavy weight championship match between champion “Scrap Iron” Adam Pierce and challenger “The Rebel” Jeremy Wyatt. The fans in Des Moines thought they saw the NWA title change hands on this night. The first ref was knocked out of the ring. Wyatt make Pierce tap out but no ref was in the ring. Mark Sterling came out to help Pierce but Wyatt tossed him out. A new ref came out and Wyatt got the pin on Pierce. But no, the first ref got up and and said that he saw Sterling hit Pierce with a spear so Wyatt was DQed. So the title was given back to Pierce.
Posted by pro wrestling photog at 8:02 PM No comments: