This past Saturday night the town of Bell Plane, MN held their annual German Days festival and Pro Wrestling America put on a wrestling show. Before the matches started there was a sour kraut eating contest in the ring. 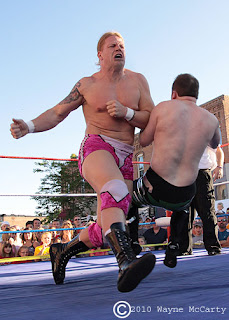 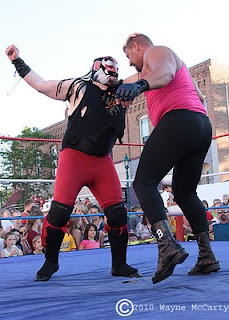 Udo pinned The Brauler in the second match. 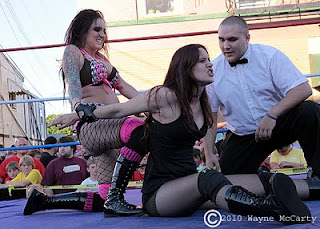 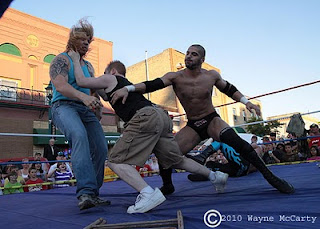 At intermission Mitch Paradise was in the ring for Polaroids with fans when he was attacked by Lenny Lane and Arya Daivari. Udo and Denis Michael came out to try to save Paradise but they were not much help as they both were tossed from the ring. 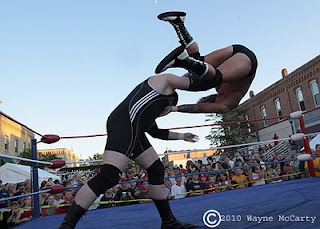 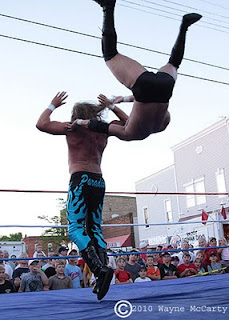 PWA champion Mitch Paradise retained his title against Arya Daivari in the main event. The beat down from intermission was not enough to defeat Paradise, the home town hero.
Posted by pro wrestling photog at 11:28 AM No comments:

This past Friday night F1rst Wrestling co-promoted an event with Wrestlicious at First Avenue night club in down town Minneapolis. The first half of the show was a TV taping for the Wrestlicious Take Down TV show. The matches taped here will be on the last two episodes of season one of Wrestlicious Take Down. Check out their web site linked above for where to see Take Down. 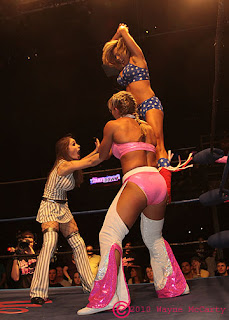 The first match of the night was Tyler Texas (Lorelei Lee) & Glory "The All American Girl"( Christie Ricci) VS Tina "The Trigger" & Toni "The Top". 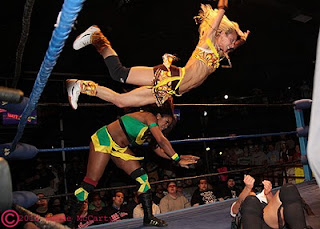 Next up was Marley (Dazee haze) & Coco Montego (Josie/Sojo Bolt from TNA) VS Faith (Portia Perez) & White Magic (Lacey). Faith came out first and said her partner was not there because she had been a little naughty but she did have a partner for this match. Austin Aries was the referee for this match. 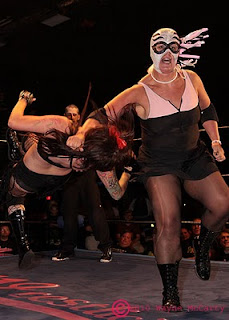 Super Nova VS Jezabel James. Both of these wrestlers were very familiar to the F1rst Wrestling crowd. 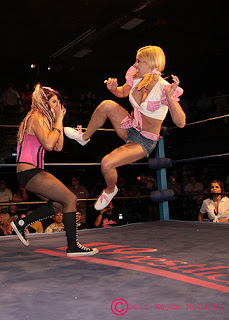 Cousin Cassie VS Juvi hall. This was Hall's debut match for Wrestlicious. She is also a second generation wrestler as her mother wrestled for GLOW as Roxy Astor. 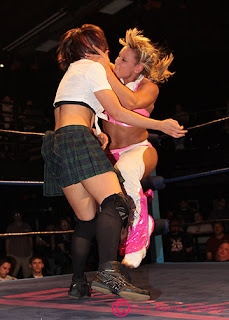 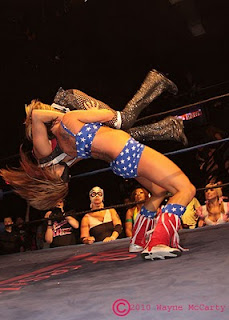 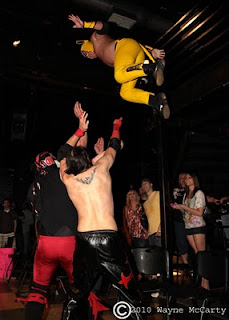 In six man tag team action Yellow Dog, Udo & Venom defeated The Prophet, Camron Cross & Craven Knyte. Someone tossed Yellow Dogs chew toy up to the second level. After Yellow Dog found the toy he jumped down on the rest of the wrestlers below becoming the third wrestler to make that dive for F1rst Wrestling. 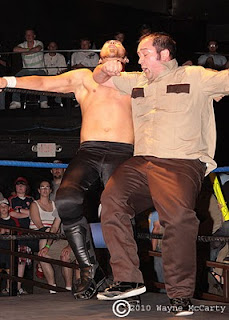 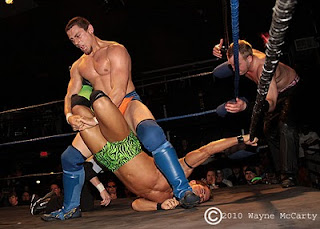 "The Professional" Benjamin Sailer won a 4 way match against "6% Body Fat" Rob James, "Playboy" Pete Huge and Brody Hoofer. Huge was ready to hit Sailer with the "G-spot" when Allison Wonderland came out and distracted him. This lead to Sailer hitting Huge with the bengerman suplex for the 3 count. 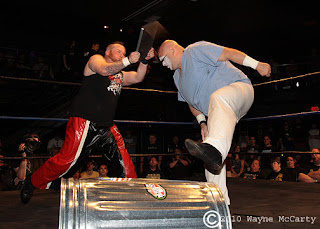 "The Anarchist" Arik Cannon beat Horace the Psychopath in a no DQ match that went all over First Ave. During the match Cannon suplexed Horace on to a garbage container and Horace was cut in his lower back by a broken glass that required 20 some stitches.
Posted by pro wrestling photog at 9:58 AM No comments: