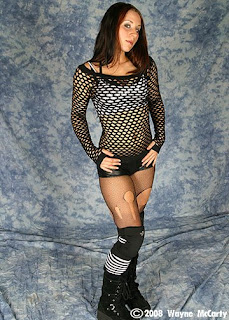 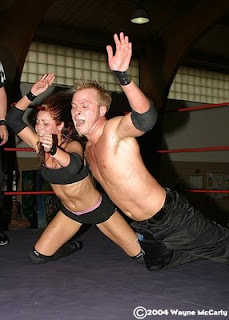 1. Was it hard to train for pro wrestling as a female? Extremely! I think it's hard to go through for anyone, but there are definitely extra challenges going through as a minority in this male-dominated environment. Women aren't exactly looked upon with the utmost respect in the wrestling industry, and there are definitely some women around that absolutely don't help our cause in gaining that respect. It's unfortunate! But, on the bright side, its really helped me to grow into a strong and independent person. ( Lacey Vs Pete Huge 4/11/2004 Promociones Renegado Lucha ) 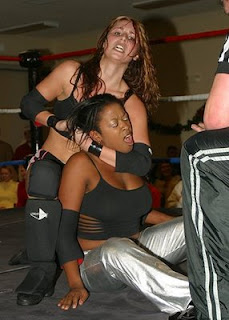 2. The battle lines have been drawn, you must pick a side. Are you with team Aniston or team Jolie?Eh, I'm neutral. Don't really know much or care about either, but Jolie does seem to do a ton of charity work and is a good will ambassador and all that so I suppose I'll pick her. ( Lacey Vs Josie 12/6/2003 FLWA) 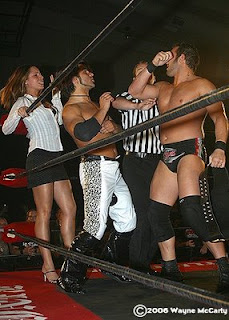 3. Have you ever been injured in the ring? I've had a few concussions, been busted open a few times, black eyes, stuff like that. Also jacked up my knee pretty badly a few years ago by dislocating the knee cap and slightly tearing some tendons and ligaments. Luckily, surgery was not needed. ( Lacey with Jimmy Jacobs Vs Roderick Strong 6/24/2006 ROH) 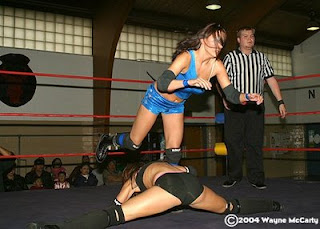 4. What’s the weirdest thing you ever received from a fan? Customized booty shorts. WEIRD. (Lacey Vs Rain 4/11/2004 Promociones Renegado Lucha) 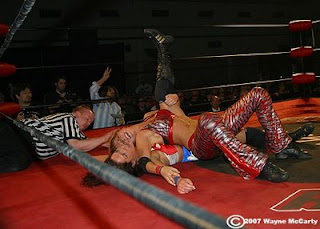 5. Who is the greatest female wrestler from Minnesota, Nora Greenwald or Madusa? I love them both!!! I really looked up to and admired both of them when I was younger. They both definitely played a role in my desire to start training. (Lacey Vs Allison Danger 4/27/2007) 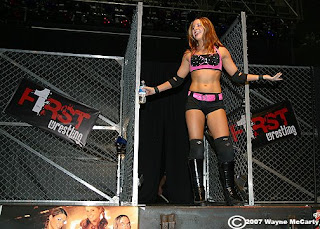 6. So ah…what do you think about the war in Iraq? I think its pointless, horrible, awful, terrible, disgusting, a gigantic waste of money and resources, a gigantic waste of lives, an incomprehensible injustice to all of humanity...etc. etc. etc (Lacey at F1rst Wrestling 4/22/2007) 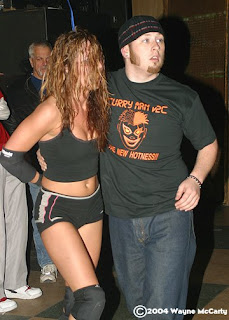 7. You were an announcer on Mtv’s very short lived Wrestling Society X. If you could get cast on another Mtv show what would it be?Absolutely NONE of them. Well, unless my role on the show was to fuck everybody up Grand Theft Auto style. I can't even comprehend the shows on Mtv (well, most tv) these days. It's sick these people exist to populate these reality shows and its sick there's such a market for it! ( Lacey with Arik Cannon 1/21/2004 Downtown Championship Wrestling) 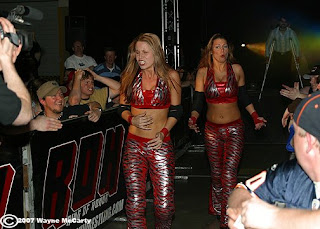 8. So are you still wrestling or what? For now...I've got more important things to focus on. Also, really, no creepy wrestling fans deserve to see me in the ring! (The Minnesota Home Wrecking Crew 4/27/2007 ROH)
Posted by pro wrestling photog at 4:50 PM

The 9th question should have been "Why did you decide to write on your personal website that your mother was scared when you were doing an angle and asking fans to send real money for a FIND LACEY FUND?"

the 10th could've been "did you ever return any of the money that people sent you for this horrible con?"

See, the 10th doesn't make sense without the 9th, that's why you gotta ask the 9th first.

Sadly, yes. I personally know one. She was less than pleased when I had to explain that it was a 100% worked angle. Of course all messages asking for her money back were never returned because "Lacey was still missing." Why even ask for money on your personal website during an angle? There is nothing good that can come from even asking. That was a sad move, even for pro wrestling.

Actually, there was never anything set up for her to receive any money for any "fund." She just continued to sell her merchandise like she always has and probably always will.

Actually, Lacey, there was. You had Mary Kate Grosso accept funds from at least one person for nothing in return other than to assist in the search after you wrote that your mother was looking for you and scared. This is a fact. Just because Mary Kate works for free like a good fangirl, you can't make pretend you didn't really ask for and receive money for this. And if this isn't Lacey, then how in the world would you know what is and isn't set up?

"CarolineL"--I happen to know her quite well. If Mary Kate accepted money then Lacey never heard about it or saw it. There was never anything official posted on her website about sending in money for nothing. There was talk of auctioning some of her ring gear off, but that never actually took place. I do know payments were sent for merchandise, but she never got any "free" money. If Mary Kate Grosso did, you should take it up with her.