This past Saturday night the American Wrestling Federation held a fund raiser event at Tartan High School in Oakdale, MN. 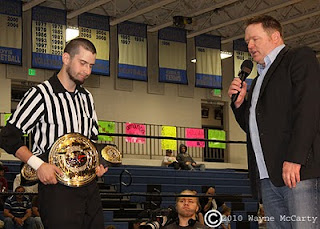 TV announcer Mortimer Plumtree came to the ring to do the TV taping intros. Then he called AWF senior official Rob Page to the ring for an announcement. Page told the crowd that AWF champion Tony DeNucci was attacked in the locker room and that AWF commissioner Sabrina Perri decided to strip DeNucci of the belt and start a tournament for the title. Page also showed off the brand new AWF championship belt. I must say, this is one of the finest looking wrestling belts I've ever seen. All the singles matches on tonight's card were part of the AWF championship tournament. 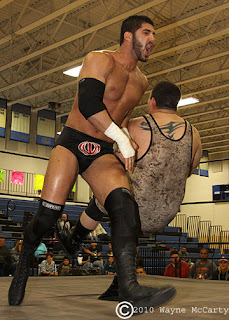 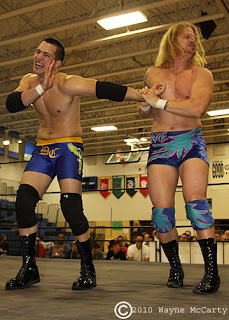 Lenny Lane defeated rookie Chiropractor DC in another first round match. This was my first time seeing DC and I think it was only his second match. Lane made DC tap out to the walls of lane. If DC ever has any finishing moves I think they should be called "the spinal crusher" or "the adjustment". 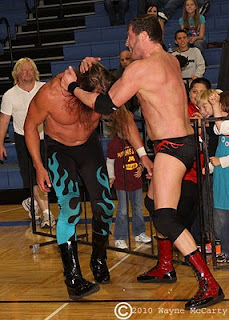 In the third match of the card Mitch Paradise wrestled Brody Hoofer. The match ended in a double count out. I'm not sure if that means that both men are now out of the tournament or not. 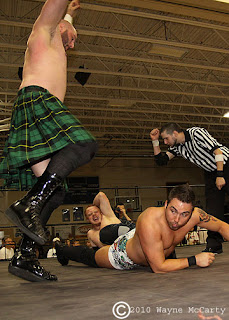 The AWF tag team champions John Johnson & Aaron Corbin defeated Ryan Cruz & Benjamin Sailer to retain the belts. It was odd to see Sailer tag with someone else as he and Nate Bash have been a regular tag team for the last three years. Being that both Sailer and Cruz wrestle often in tag team action they worked really well together in this match. The three count came after Corbin kicked Cruz's face into the crowd and Johnson made the pin as he was the legal man. 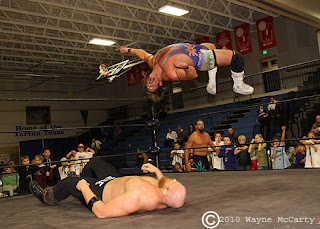 In the last match of the night Johnny Parks defeated Thoruf Marius. Mitch Paradise came to ring side to try to help Marius but it backfired and Parks got the win to advance in the tournament.
Posted by pro wrestling photog at 11:23 AM

That was actually DC's 4th match I believe, the second in this state. and he does have a finisher its called "The Final Adjustment" so you were close on the name

Thanks for the correct info on DC.