Costumes from Halloween past

Today is Halloween so I decieded to look back into my archives for some photos from MIW and MPW where the wrestlers dressed up for the holiday. 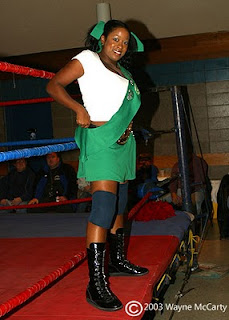 First up is an MIW card that took place in Big Lake, MN on Halloween night 2003. Josie, MIW womans champ at the time, came to the ring dressed as a girl scout. 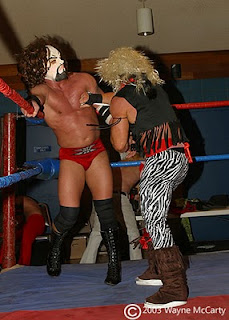 The main event for the MIW Halloween card was a battle royal. Ken Anderson wore some kind of mask, Undertaker maybe. Johnny Parks was dressed as an '80's rocker. 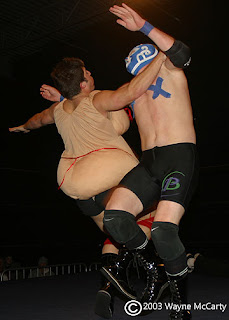 On November 2, 2003 MPW held it's annual Halloween show at their weekly Sunday event in Rogers, MN. These weekly shows were held at the MPW arena/training center. One of the funnist costomes that year was worn by The Punisher (Rob James). He was a fat stripper and his opponent here is El Viejo as Pretty Boooy Delgado. Or is it Pretty Boooy Delgado as El Viejo? 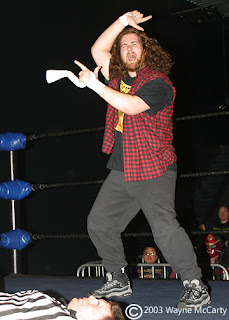 CJ Talon looked very good as Mick Foley for his match against Joessiah. Talon even used Mr Socko on ref Brian Wallenberg after the match. 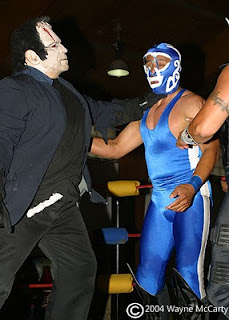 Lucha Libra is know for high flying, fast paced action, but it's also know for some crazy costumes. At the first ever lucha libra show I atteneded back on April 11, 2004 Frankenstein was envoled in a 6 man match. 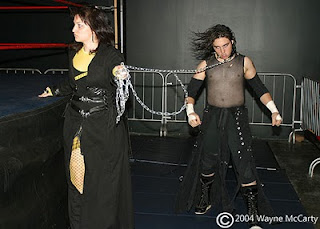 The 2004 MPW Halloween show took place on Halloween night at the MPW arena in Rogers, MN. For most of the matches the wrestlers switched ring gear with their opponents. In the photo here V2(Ryan Cruz) & Lisa came to the ring dressed as Animal Sam and Valkrie. During the match both V2 and Sam went under the ring and switched into their regular ring gear. 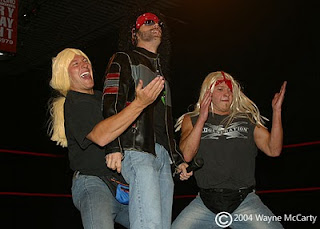 Chris Jordan, Joey Envy and Pete Huge did and in ring promo dressed as Triple H, X-Pac and HBK. Jordan didn't have a fanny pack so he borrowed mine. 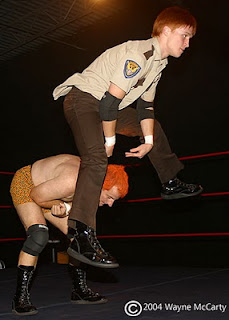 Darin Corbin and Sheriff Johnny Emerald did the gear switch and Emerald even went so far as to color his hair red. 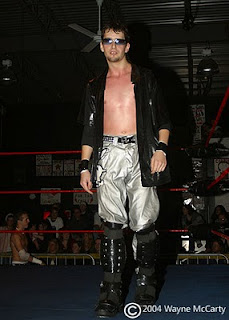 Ref Rob Page got into the fun as he dressed like his favorite wrestler "Playboy" Pete Huge. 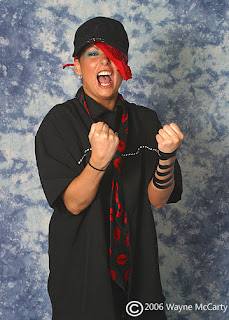 This photo didn't take place around Halloween but I just had to enclude it. Any guess's as to who this is and who they are dressed up as? You can guess by clicking on "comments" below.
Posted by pro wrestling photog at 7:24 AM