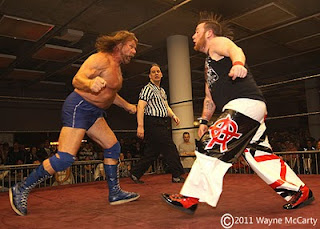 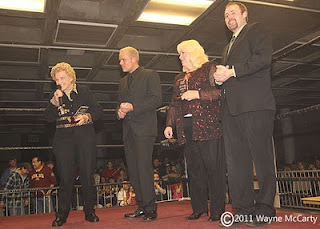 Blogger has changed the formatting of of the blogs so I've been having a hard time getting this to work like I want it to. If I can't get it to work this may be my last post.With that said, here are the results of the Heavy On Wrestling show from last Saturday at the DECC in Duluth, MN. 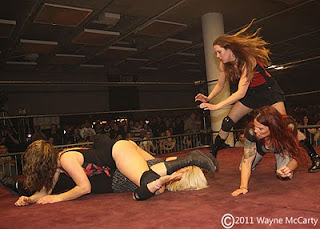 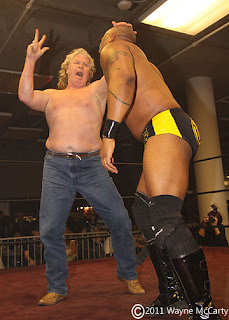 "Wild" Bill Irwin came to the ring to be inducted into the HOW Hall of Fame. He was inturupted by The Black Stallion. The two wrestled for  a while but Stallion left the ring as Irwin got the better of him. 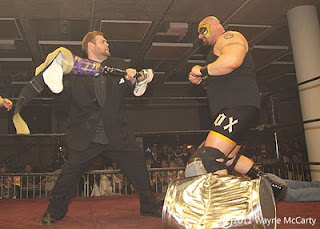 Heavy D & Dirty Dick Sawyer defeated the Barking Spiders (Ox & Clutch) in a hard core match. Before the match Heavy D was arrested by Officer Mark Barker because he was intoxicated. After a few minutes of the Barking Spiders beating the crap out of Sawyer the Spiders grabbed two of Heavy D's younger brothers out of the crowd and beat up on them. Heavy D returned to the ring with Barker in a shopping cart.  Heavy D got the win after he hit Ox with his own brothers prosthetic leg. 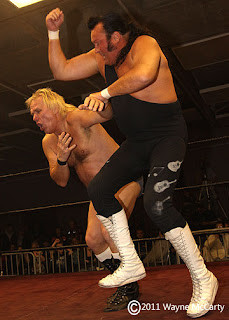 The Honky Tonk Man defeated "Rock N Roll" Buck Zunhofe. Before the match Zumhofe talked about how mad he was that HTM stole his act. HTM won with a roll up after a shot to Zumhofe's nuts. 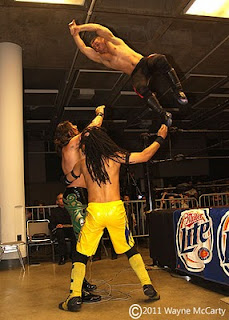 The main event for the night was three way for the HOW heavy weight championship. Champion Benjamin Sailer faced off against Nate Bash and Lance Hoyt. Before the match started Sunny came out to say that she was going to manage the champion. Sailer go the win after he suplexed Hoyt over Bash and then pinned Bash. 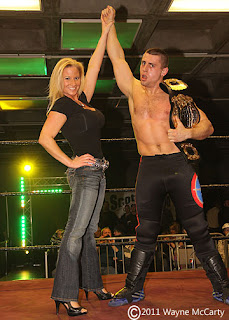 Benjamin Sailer after retaining the HOW heavy weight championship with his manager for the match, Sunny.

Love it. Brings back the days of AWA at Boylan Central Catholic. I'm declaring a Buck Zumhofe holiday http://www.zombielogicblog.blogspot.com/2012/05/buck-zumhofe-to-be-special-guest-dj-for.html