A new pro wrestling promotion has started up in the MSP area.This past Friday night Prime Time Wrestling held their first ever pro wrestling event at the Bloomington Knights of Columbus. 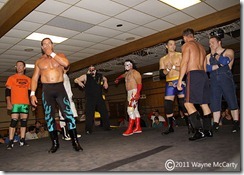 The card started with PTW commissioner Dave Tobin telling the fans that there would be a tournament taking place over the next 6 months to crown the PTW champion. Lenny Lane came out to say that he should be champion now. The rest of the wrestler came out one by one all to say that they are just as good as Lane. It was a nice way to introduce all the wrestlers on the card to the fans. Chiropractor DC defeated Denis the Menace Micheals. After the match a women named Tiger Lilly came to the ring and dragged Micheals by his ear to the locker room. I have never seen Lilly before. 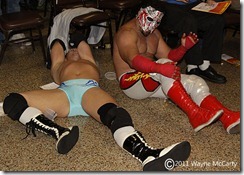 Mikey Wipeout vs Apostle 13 ended in a double count out. 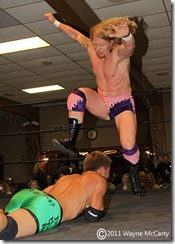 Former WCW Cruiser Weight champion Lenny Lane defeated The Rain Maker by submission. This was my first time seeing The Rain Maker. In the promo at the beginning of the card he said that he’s only had two matches so far in his pro wrestling career. 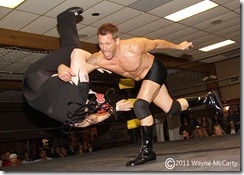 The Magic Man defeated Udo by pin fall. The Magic man has had fewer matches then The Rain Maker.

In the main event Mitch Paradise pinned John Johnson after choke power bomb. In all the years that I’ve been photographing Paradise’s matches this was the first time I saw him bleed. Paradise got a bloody nose when Johnson hit Paradise with his elbow.

After Paradise beat Johnson the lights went out. When the lights came back on a 7’ masked man was in the ring attacking Paradise. I have no idea who that masked man was. PTW has a second event scheduled for October 28th at the Bloomington Knights of Columbus so maybe more will be revealed about Tiger Lilly and the masked man.
Posted by pro wrestling photog at 10:24 PM